This is another ‘scrapbook’ page to assemble some of the images, video and audio I have of historian/composer/performer John Shortis and his wife Moya Simpson performer/singer/choirmaster/actress/activist.
The were awarded an OAM for their political satire cabaret and community work. 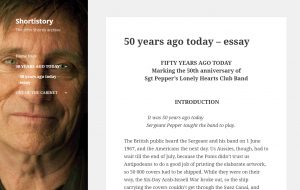 John is a ‘popular’ music historian and you’ll get a good sense of his perceptive ‘voice’ in his Shortistory website. He describes it’s purpose being “so that my research and quirky self-taught view of history is available to a wider audience. I now want to write up upcoming and past shows, as e-Essays on this website.” Read the one on the Beatles 50th anniversary of  the Sgt Pepper album.

I’ll make more sense out of this sometime soon, there’s a lot of video on hard drives.

Presented in May/June 2013 at the Q Theatre in Queanbeyan, this is the first half of Shortis and Simpson’s dramatised history of Australia’s first 27 Prime Ministers, with a song for each. With Nick Byrne and Kate Hosking, John Shortis and Moya Simpson.
John Shortis – researcher/songwriter, John Romeril – writer/dramaturg, Catherine Langman – director. With the Prime Time choir drawn from the the two choirs they run, Worldly Goods and Can Belto choirs.
See shortisandsimpson.com for more. All material is copyright by John Shortis 2017.
Just me and two cameras from the middle rows of the audience. I’d edit some of this a little differently now but you’ll get the idea of their bigger productions. And the cleverness.

The second half of Prime Time is on Youtube here.

They still perform regularly, this was a Melbourne concert organised with friends.

I also took a lot of PR photos for John and Moya, and produced some flyers for their promotion.

And a flyer for one of Moya’s solo shows. 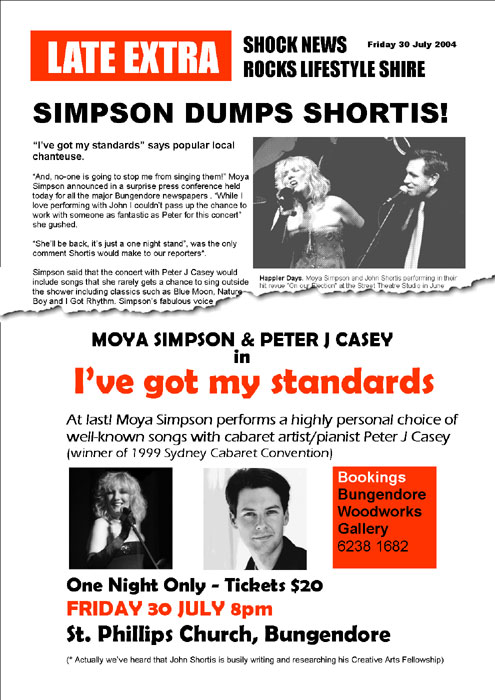