This video is the quickest way to explain the Truffle Festival that started 2009 and is still going strong.

As you’ll have noticed reading Food & Wine sections at this time of the year, the talk turns to truffles. For most of us talking is what we’ve been limited to. However this year you’ll have a lot more opportunity to taste them, as the restaurants, cafés  and cellar doors of our region will put truffle on their menus for the first Capital Country Truffle Festival.

My experience of fresh truffles began in 2001 on a visit to Italy, on a foodie holiday chosen by pointing at random in the small travel ads section in Gourmet Traveller. By delicious luck we chose Living Italy, a small company run by ex-Canberran Neil Moore and his wife Carol Searle, and we spent three weeks in Umbria, being introduced to an unabashed truffle culture. On our trips back since it was reinforced. Claudia Roden in her book The Food of Italy says (almost disapprovingly) that in Umbria…

“truffles are so prolific they are put in everything – spaghetti, omelettes, scrambled eggs, salads; served with fish, cheese, as a garnish for grilled meats: spread on toast and in the sauce of almost all the roast and stews. Great handfuls are used grated, chopped and in shavings … mashed up with garlic and anchovies or with black olive paste or chopped mushrooms.”

Visiting twenty years after she wrote that, little had changed. Think slices of truffle on pizza. (The ultimate street food, served hot, wrapped in paper.) Truffle in the stuffing in a charcoal roasted lamb. (Salty, wonderfully tasty.) Spaghetti with just virgin olive oil and shaved truffles. (Intense clear flavours and inexpensive.) Maybe these experiences have spoilt me? Well you should be spoiled too.

In Europe truffles are mostly a produce of the forests, wild harvested, and they’re only available for a couple of months. That makes them exclusive, which has lead to their place on most restaurant menus as an expensive treat. With the prestige and mystery of a premium product, the appreciation of truffles soon spread to fine dining in other parts of the world. They were made even more expensive because they’re air freighted to the New York, London and Hong Kong restaurant kitchen doors.

In a classic Old World – New World twist, in Australia and especially in Capital Country we’re now growing increasing quantities of high quality truffles. We’ve skipped the hunter gatherer, we’ve passed the ‘experimental’ stage and reached it appears, a ‘commercial’ stage. But in the accelerated process we’ve also skipped the thousands of years of appreciation and any culture of using them in our cuisine.

Things we the diners haven’t learnt, is that they’re not remotely like the ubiquitous truffle oil (which is a synthetic flavouring), or that they have a natural glutamate that enhances the flavours of almost everything they’re added to. This makes them great for adding to sweet and savoury dishes. We don’t appreciate that once dug up they only stay fresh for a week or so, and because we don’t (yet) eat them enough when they’re available, unlike the Europeans, we don’t mourn the end of the season. That calls for an education process, best done by encouraging our local chefs to use them on their winter menus, from modest café to grand degustation. 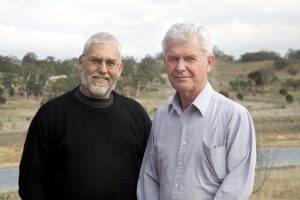 So when local truffle grower Wayne Haslam (he’s also the President of the Australian Truffle Growers Association) suggested that I help him stage a Festival like the one he’d visited in West Australia at Mundaring, he had me hooked. We’ve called it ‘A Taste of Mid-Winter Magic’ and that’s what you can expect from the participating regional venues from Bowral to the snow. The Festival launches on Saturday June 20 and you’re all invited.

This year I hope you’ll be sad too when the fresh truffles run out in August.
Fred Harden