Think of this as a slide show. With music.  This post came from my Another Country Diary which I’m slowly moving from its old site here, and updating with bigger pictures and new bits. You can either read the story then watch the pictures or just wing it and hit play.

Last weekend we (Jan, Kate, her then boyfriend Kial and Aurore – visiting from Melbourne) went to the Lynwood Cafe in Collector for my birthday lunch. While I was there, this bowl of nobbly fruit caught my attention. I was told that they were Osage oranges, and came from an old tree growing locally. “Don’t eat them, they’re poisonous” and “sniff them, don’t they have a nice smell?” were all I could learn about them until I got back home to the Web.

The Osage tree is named after the Osage Indians who lived near the Arkansas River (Osage is actually a bastardised mishearing of their name Wazhazhe apparently meaning “war people”) and the tree was discovered in the push to open up the prairies beyond the Mississippi. It was identified as early as 1804 on the famous Lewis and Clark expedition.

The Indians used its tough springy wood for bows and war clubs, leading early French settlers to call it ‘Bois d’arc’ which became ‘Bodark’ to the settlers in St Louis who quickly recognised it’s unique qualities. The tree is tough and thorny and when saplings are planted close together (they even planted them on an angle so that they intertwined) they grow quickly to a strong impenetrable hedge that was perfect for retaining stock in the days before barbed wire. It had the reputation for being “horse-high, bull-strong, and hog-tight” after only four years. If it isn’t kept trimmed it grows into a tree over 20 meters (60ft.) tall and around 2 meters thick.

The wood is hard and durable with natural resistance to fungus and insects. Even when the advent of barbed wire opened up larger areas of land, the Osage wood was used for fence posts. The posts lasted at least 50 years in the ground. Its density means that it will sink in water and even the green wood burns very hot. Tradition says it repels spiders and cockroaches.

The attractive green fruit are about the size of an orange, and have a distinctive almost citrus smell, but the tree is closer to a mulberry (and silk worms will eat its leaves). The fruit is a complex compound of separate fruiting parts with their own seeds and they form a pithy whole that bleeds a white bitter sap when cut.  In America squirrels and other animals can eat them with out ill-effect, they were even called ‘horse-apples’. I don’t know what eats them here.

The Latin name is Macluria Pomifera, a name reached after some apparent friction with a famous American botanist called Rafinesque who first described it in 1817. The name Macluria comes from William Maclure who was described as the father of American geology, (and who I found was part if an interesting ‘utopian’ religious community in Indiana called New Harmony.) 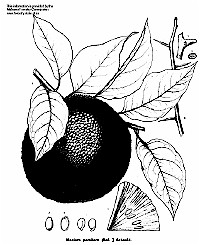 There are a number of web pages all of scrappy quality about the startling Osage orange, so I’ve saved a PDF from Alabama Forestry somewhere that has more information and the illustration’s in the movie. There are some nice pictures of the cut fruit and leaves on www.kaweahoaks.com and of the thorns.  Doing a web search I found an Australian craft wood supplier that sold the seasoned wood for turning and craft construction. The wood also seems to be used for musical instruments and is still preferred for archery bows. I’ll try and track the local tree down and photograph it.
(The Osage story continues in a later diary entry below) 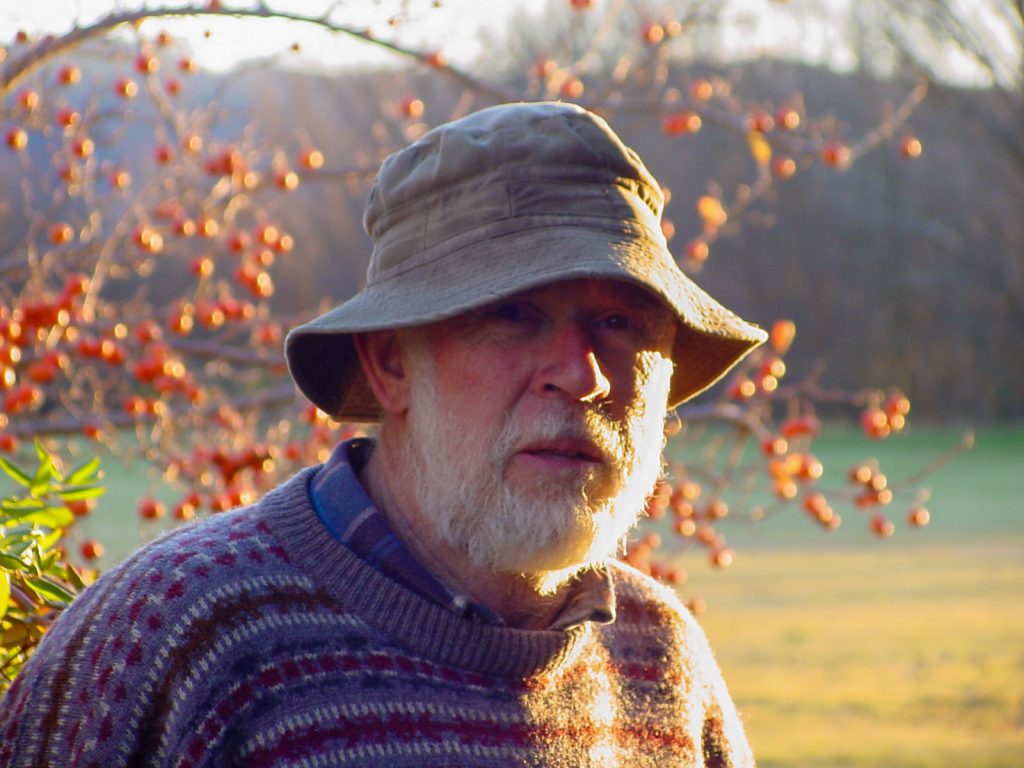 I walked past John Walter’s house on Friday night after walking along the Common (in a round about way to pick up Kate’s car from the garage). I saw the trees with big red berries first, and then recognised the Osage oranges piled in two neat pyramids on each side of the gate. I could see another pile against a tree in the yard but I took the last two images on the disc and in the cold, the camera battery was too flat to format a new one. (Digital is great isn’t it?) Having just read up about the Osage (and written about it in this entry) I was amazed at the serendipity and I resolved to return the next day and ask the owners where the fruit came from.

Yesterday I knocked on the door, got no answer and in true country style, went around the back. An older man was in the yard and I introduced myself, and said how I’d like to photograph his Osage trees.  I’d seen him around town didn’t know his name but he knew who I was. He seemed pleased that someone was interested and we talked over a cup of tea in his kitchen, and I photographed, as he showed me around the trees, and the seedlings he was growing. I came away with a new part of the story of the Osage, a young seedling tree and some fruit.

John said that he used to work on Carwoola Station at Captains Flat and that there is a long row of Osage trees, he estimated about 200 or so, growing on the property. He’d grown his own trees from that seed. Captains Flat was an early gold mining area and John believes that the trees came as seed with the American miners who came here after the Californian gold rush. He had a few tall, relatively young trees on his fence line, and some smaller ones growing with hawthorn in a dividing hedge that he said he had to cut back often, as they grew so vigorously. The trees as you’ll see from the pictures are  not very dramatic in their winter undress, but judging from the amount of fruit on the ground, would have been quite spectacular a month ago. 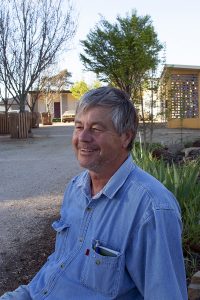 One thin branch about two metres long had a rope around it, John said the branch would have broken with the weight of the fruit if he hadn’t tied it up. He said his wife nagged him to pick up the fruit and take it to the tip, but his pyramid sculptures are a creative solution.

As I walked back home, I met Greg Nye the real estate agent, outside the Bungendore Motel, who has a great love of the history of the town, started a local newspaper,  and seems to know everybody. He saw the bag and the bare Osage stalk, and I said I’d just been given it by John. Greg said he also had a plant from him, and that John was Bungendore’s ‘Johnny Appleseed’, responsible for many of the community plantings and for a great row of oak trees in the hills nearby.

There’s more to learn about John and the Osage story and I’m sure you’ll get to read about it.

We planted the seedling next to the compost bin, next to the horse chestnut tree. I knew they grew tall and I was a bit anxious about our next door neighbour Meagan ( who famously said while I was working in the yard how much she hated Autumn “It’s such a messy time” she said, probably meaning that our trees were causing her raking up work. The seedling was very spiky so I wanted it out of the way and I knew that the chestnut tree wouldn’t last as long as the Osage, so I figured ‘replacement’. By the time we left the tree was about head height and I mentioned it to the new owners figuring Meagan wouldn’t be around to complain about the ‘messy’ falling fruit as it grew. The house block has been subdivided so I wonder if it’s still there.