The legacy of Margaret Fulton
...and your mother's cookbook

Reaching into the wardrobe and putting on my Regional Food hat (a toque with a slouch brim) I wanted to add these 2005 images to a Facebook post (below) I shared when Margaret died this week (July 2019).

Jan O’Connell has written about Margaret’s media background here on her Australian Food Timeline. It started with a move from cookery teacher, to managing David Jones’ kitchen and home-wares department. Writing for women’s magazines under the pen name of Ann Maxwell lead to a job as an ad agency account executive on business including Kraft, Kellogg’s and Kelvinator. “Then, in 1960 she was recruited by Woman’s Day as Food Editor…In 1968, she released her first cookbook: The Margaret Fulton Cookbook. After its initial print run of 30,000 copies sold out, the book went on to sell more than 1.5 million copies.” (Looking back I can’t imagine how we saw that overlit, contrasty, food photography as appetising or attractive. I think we were all just eager for the ‘content’ and mentally translated to our own kitchens, which wouldn’t have had a copper pot like that.)

Rupert Murdoch convinced her to move to New Idea magazine in 1979 when he also recruited Dulcie Boling as editor and proceeded to create the best selling Australian weekly women’s magazine ( Woman’s Weekly magazine was actually a monthly). John Clemenger Advertising were their agency and I started working on their TV commercials from that time as a young agency producer. Arthur Sturgess was head of TV production and Dulcie always liked him and looked dissapointed when I was the one bringing the commercial for approval. There were blocks of weekly TV ads, most with a recorded segment with Margaret. Lots of graphics, celebrities and sometimes a presenter. They obviously worked.

I spent often late hours working on deadlines for those commercials in AAV’s edit suites, at Ray Hughes’ Illoura and Channel 10’s production company who had the first Quantel Harry paintbox system in Port Melbourne.  (The FACTS approval cassette was dispatched at the same time as the broadcast dubs.) There’s room for another story about that early Melbourne video production history. I actually got to fly to Los Angeles to work on some animated titles for New Idea on one of the first videographic synthesizers (where I met Peter Webb). No-one had considered the NTSC to PAL conversion sizes (including me) and they were mostly useless when we got them home.  I’m guessing that AAV’s Rutt-Etra synthesizer was around this time as well. There’s some Super 8 film I have still to transfer of ‘behind-the-scenes’ from that time.

But this photo gallery comes from a later time, May 2005, when Jan and I were still working on Regional Food magazine and I was invited to the ‘Great Anzac Biscuit Bash’ at the National Museum of Australia in Canberra. The Country Women’s association  had entered their favourite Anzac biscuits ( do you like yours chewy or crunchy?) and Margaret and a chef (from the Museum catering I think) picked out an audience member to make a batch as demonstration. The young girl was delightful and took her sample back to her family in the audience to share. At one stage Margaret was asked by the chef how much Golden Syrup to use and you could see her confusion. A classic recipe she obviously didn’t make often, but iconic, and she was the representative of all things home cooking. She paused and waved her hand at the cookbook sitting on display and said, “What do I say in the recipe?”. She was clearly tired and yet as always the smile and caring were genuine. I felt a little sad as if we were using her energy up. I’m sure the red headed girl will remember the day. (And has probably blogged about it this many years later.) 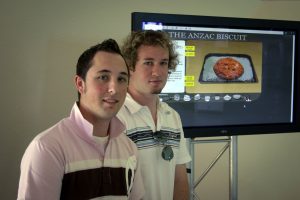 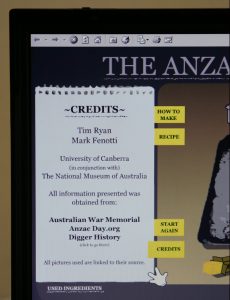 While recovering this record, I should mention the two Multimedia students from the University of Canberra who were a bit overshadowed when they presented their ‘How to make an Anzac biscuit’ multimedia piece. Tim Ryan and Mark Fenotti I seem to remember, used Macromedia Director for an interactive display to run elsewhere in the Museum. I presume this was a class project?
I did a bit of Google searching but can’t see what they are doing 14 years later. Certainly not using Director.


And here’s the Facebook entry with details of an earlier commercial Margaret did for Grey Advertising.