On creating an Archive
and letting things go <delete> ...no wait! 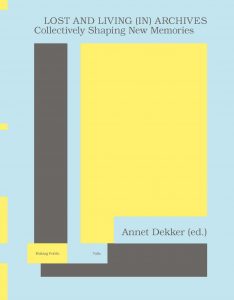 There’s a good self referential piece on web archiving in this book (at left) from the delicious Monoskop site. (12Mb PDF) Lost And Living In Archives Edited by Annet Dekker (who writes about starting Monoskop in the book). I’ve collected some quotes from it below.

“It could be stated that today everything is archive and everyone an archivist. People everywhere constantly create, collect, document, make lists, inventories, classify, store, retrieve, and reuse all kinds of information. Not surprisingly, Eric Ketelaar (Emeritus Professor of Archivistics at the University of Amsterdam) proclaimed ‘Everyone an Archivist’ (Ketelaar 2006, 14).
In his eponymous essay he describes how the meaning of the term archive has gone ‘feral’, and how ordinary people have become archivists too, as evidenced by the popularity of uploading and using online archival platforms for photographs, videos, music, etcetera, as well as those supporting and helping to maintain large online archival facilities such as the Internet Archive (Ketelaar 2006).
Ten years later, the creation of documents and their aggregation into all sorts of different—especially online—archives has become part of everyday life.”

“It is indeed generally accepted that archives construct a specific account of  history; many things end up in an archive, but even more remain outside, to be forgotten. Rather than something negative, this loss, in the sense of forgetting, should be treasured, as it prepares for something new to emerge. Generally, loss in an archival sense is seen as the undesirable antipode to memory. However, German philosopher Friedrich Nietzsche has argued that forgetting is also positive, active and essential to life and thinking. Immersing oneself passively in memories of the past would obstruct creative action in the present, and too much of a historical sense would destroy the concept of ‘history’ itself (Spinks 2003, 80).”

“As concluded by Nietzsche, ‘there is a degree of sleeplessness, of rumination, of ‘historical sense’, that injures and finally destroys the living thing, be it a man or a people or a system of culture’ (Nietzsche 1957 [1874], ).
Whereas older archives were guided by collecting evidentiary processes in the form of physical objects (in media such as paper, microfiches, photographs or audio), current attitudes towards archiving are increasingly focused on ephemerality and require strategies of modulation, movement, and mutation.”

And that’s what has been happening as I move through the films I’ve transferred. Disturbed. Sleepless.