The Australian magpie was a surprise to the first European visitors. A large and attractive bird that bore only a passing resemblance to the English magpie- which is a smaller bird with a mostly white front. They called it different things mostly related to how attractive it’s call was. 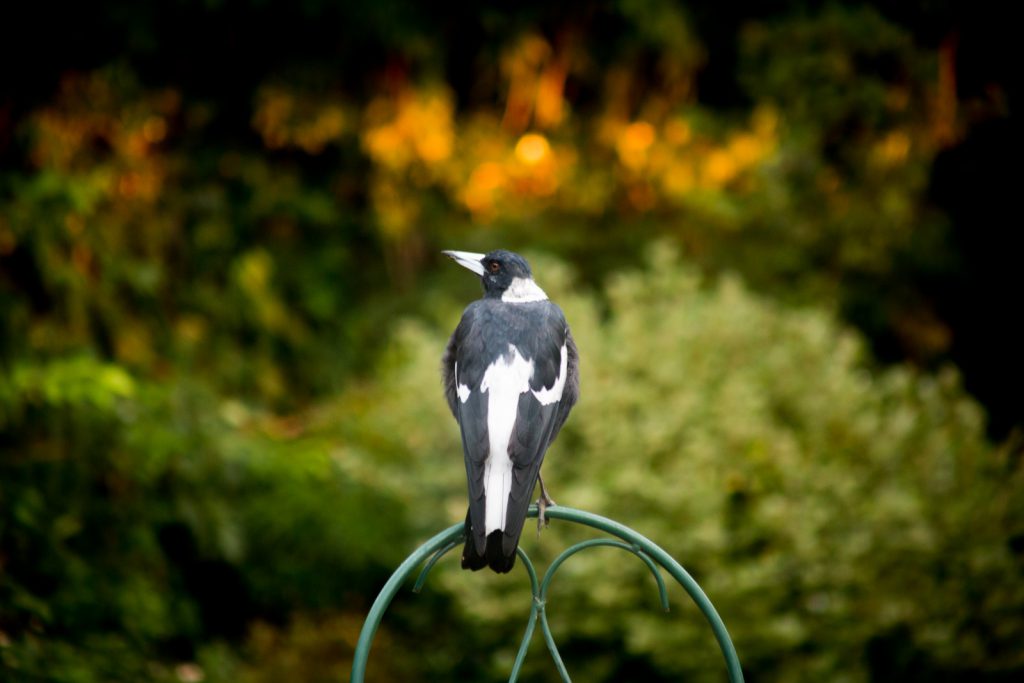 Magpies are common across Europe but not in America.  They were thought to be members of the crow family Corvidae. The Australian magpie is now placed in its own genus Gymnorhina and is most closely related to our  black butcherbird (Melloria quoyi). The pattern colours seem the only reason they thought they were the same bird. I wrote about our similar confusion of Crow and Ravens.

An early Australian stereogram image of (I suspect) a stuffed magpie in a museum.
From the series of images from Villa Alba

Wikipedia gives us the etymology – “Magpies were originally known as simply “pies”. This comes from a proto-Indoeuropean root meaning “pointed”, in reference to either the beak or the tail. The prefix “mag” dates from the 16th century, and comes from the short form of the given name Margaret, which was once used to mean women in general (as Joe or Jack is used for men today); the pie’s call was considered to sound like the idle chattering of a woman, and so it came to be called the “Mag pie”.[16] “Pie” as a term for the bird dates to the thirteenth century, and the word “pied”, first recorded in 1552, became applied to other birds that resembled the magpie in having black and white plumage.[17]

They’re clever and are able to recognise their mirror reflection, a feature usually reserved for primates. The thieving magpie is part of folk lore and Rossini’s opera revolves around a magpie stealing a silver coin and then a spoon, causing melodrama.
Pierro della Francesca‘s painting of the Nativity has one magpie attending the scene on the roof, as the only bird.  Some cultures consider them an omen of bad luck and one rhyme, from around 1780 says

One for sorrow,
Two for mirth,
Three for a funeral
And four for birth 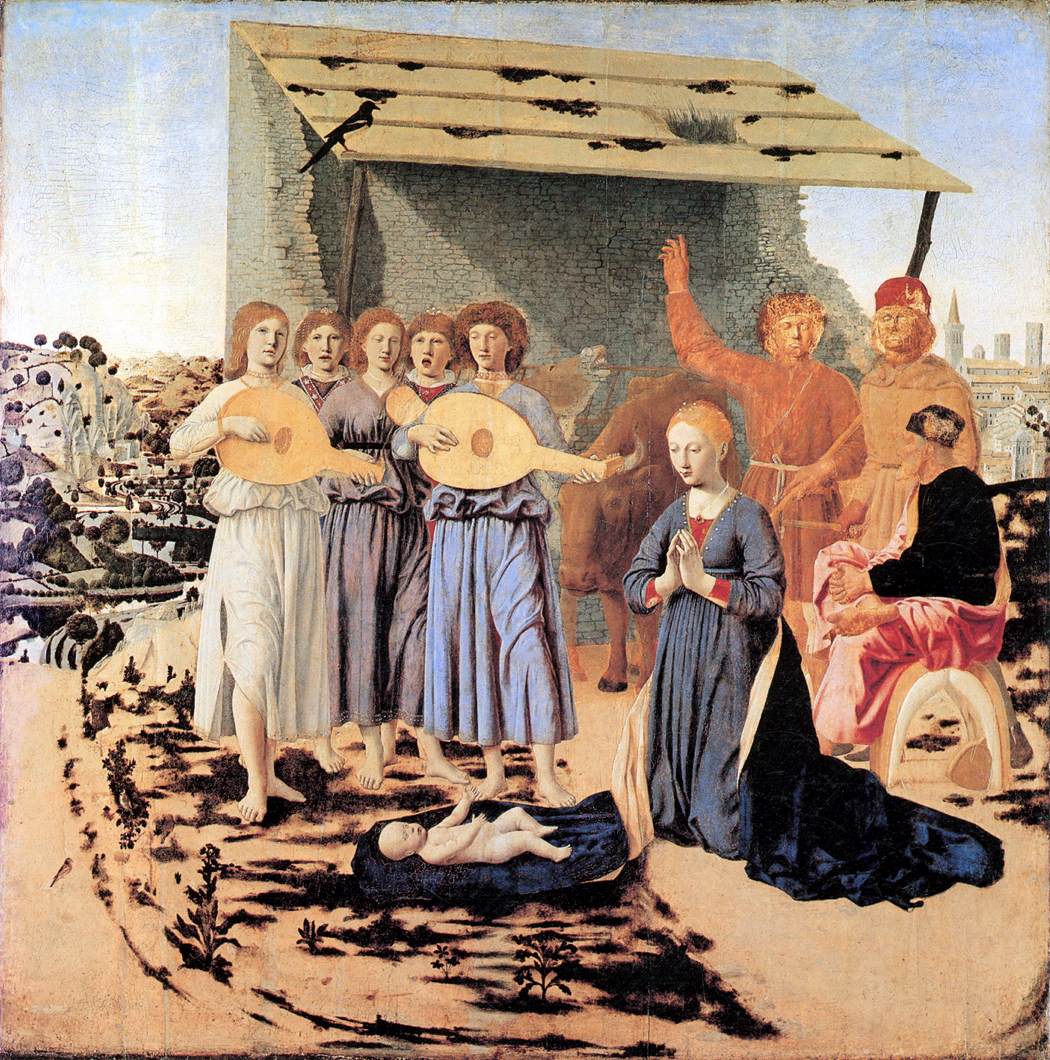 And then, there was Heckle and Jeckle 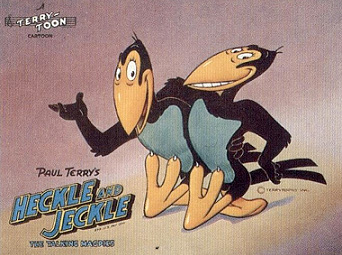 I always saw the Paul Terry cartoon characters ‘Heckle and Jeckle’ as vaguely unpleasant, but now I can’t find much evidence, watching them on YouTube (playlist). Dated yes, but maybe it was just their violence that was scary as a kid. They were part of my early Saturday night cinema going. A newsreel, a cartoon, an episode of a serial, sometimes a B movie and then a main feature. But always a cartoon, and we knew our cartoons (the audience would shout in chorus “Fred Quimby” when  his producer credit came up on a Tom and Jerry cartoon. I think we thought he was the cartoonist, or probably it was just the largest and last name on the opening titles. Or just a funny name.)

We didn’t have the cheeky thieving magpies folklore or the  minstrel show black face comics, to judge Heckle and Jeckle “one speaks with a New York accent and the other is British”.

I’ve taken lots of video of the magpies that ingratiated themselves to us at Bungendore, they came to be fed in winter and breeding season. The young males shared the role of feeding the female and chicks. 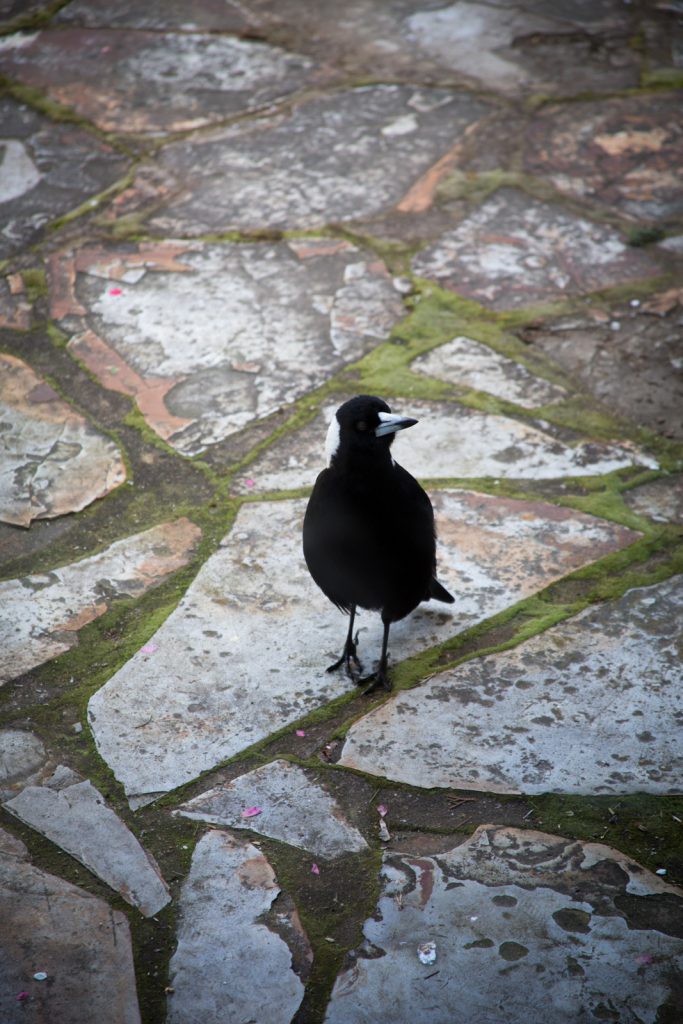 Wikipedia – “The adult Australian magpie is a fairly robust bird ranging from 37 to 43 cm (14.5 to 17 in) in length, with distinctive black and white plumage, gold brown eyes and a solid wedge-shaped bluish-white and black bill. The male and female are similar in appearance, and can be distinguished by differences in back markings. The male has pure white feathers on the back of the head and the female has white blending to grey feathers on the back of the head. With its long legs, the Australian magpie walks rather than waddles or hops and spends much time on the ground.”

I thought I’d tell the story about how magpies had the primary school class terrorised (all six or so of us at Jingellic Public School. It was a small two room school, then one-room and one teacher after the three kids of the Harden family left (there must have been others when the Walwa Butter Factory closed). Those kids who rode our bikes to school, past the big roadside trees seemed especially targeted. One day I reached out to hit a swooping bird away and actually grabbed one. I tucked it’s wings and feet in, like holding a chook, I knew how to hold a chook, and took it to the teacher. He put it in a cardboard box and then asked the class what we wanted to do with it. Kill it? Let it go? We’d all suffered from attacks, some even bloodied, often kids crying as they arrived at school. And this was a country school but I hadn’t thought about this being a lesson in Anger Management and Morality. 101 –until now.
We let it go. I don’t think the bird understood, and I can’t remember if the behaviour was modified for the rest of the nesting season.
I have a lot of video of the magpies Jan fed at Bungendore. If the door was open, one would even step inside and call for the raw mince we bought just for them, knowing that it was bad for their metabolism.