I’ve seen the real Australian crows in the north of Western Australia and in the Northern Territory and if I was holding up the bird reference book I use, (which would be hard because it’s big) I’d be able to tell you the differences between a crow, and the more common lesser ravens and greater ravens . They’re Corvus coronoides, (coronoides is a reference to being ‘like Corvus corone’ the carrion crow that early settlers recognised. The ravens were identified in 1827.)   They are the ‘crows’ we see in the southern parts of Australia. It’s a bird that is adapted to urban areas, like around Canberra, and they’re happy here in Abbotsford as I’ve seen. I have been woken by crows even in Tokyo. I wrote about ‘taccola’, Corvus monedula the European jackdaws here.

But I won’t be a pedant and correct you if you don’t call them ravens, I call them crows too. They’re on the ‘not endangered’ list, they’re well adapted, and I can hear their call echoing in the courtyard of my apartment as I type.

I’m always startled by their shape. They are big, and move from sleek to something all jagged edges as they take off. There’s blackness that seems to absorb light when you photograph them, with little reflection on wing bones from what are glossy upper feathers. It’s not just my exposure, it’s an absorbing blackness.

I enjoy watching and trying to film them, and their power in flight but I could never say I love them. In fact I was brought up to hate them and like a lapsed Catholic still feel there is an original sin that I’m denying by appreciating their beauty. This story might explain that. 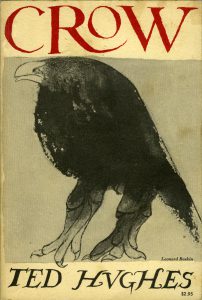 Ted Hughes poem series Crow: from the Life and Songs of the Crow has lived with me since I bought his book, maybe thirty years ago. Forty? (It was first published in 1970 by Faber and Faber.) This reprint with illustrations by Leonard Baskin is my current copy.
The Baskin artwork pushed Ted Hughes into new areas and they were true collaborators. I’m searching for a BBC audio of them talking together but the links seem to have died. It did lead me to the video below.

Hughes uses ‘strung-up mummifying crows’, an image from my childhood. Crows, like wedge-tail eagles killed sheep, calves and young lambs, or so we thought. You’ll still find crow traps in country paddocks, although now their fence netting and wooden posts are  covered in weeds and blackberries. An animal carcass or bits of them would lure the crow through the wire flaps and not until it had eaten, would it find itself / themselves trapped. The activity would attract other crows, as I’ll explain. 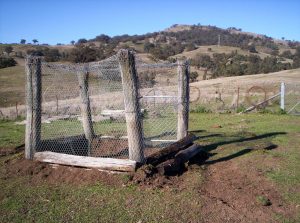 A shotgun would finish the job, and hanging the carcasses on a roadside fence would increase your social status. The kind I remember were low, the Russell Drysdale painting shows a larger probably ‘ladder style’ trap. They were called the ‘Australian’ crow trap which was a big hit in Europe, especially in Greece with an over population of crows. Makes you proud doesn’t it?

I woke up early this morning (before the courtyard resident ring neck pigeon) and was planning how to tell this story. I couldn’t get back to sleep. As an oral story, I’ve told it numerous times but a definitive written tale should have some structure. This may well be embellished later. Fluid history. 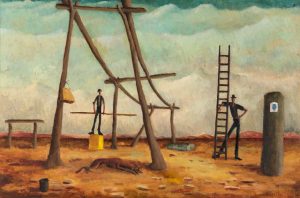 When I was growing up, we would sometimes be given a new born lamb to feed. I don’t know how they arrived but three children and a free supply of milk from the Butter Factory must have been an argument in favour. We liked our lambs that became sheep and they saved Dad (and us) having to mow the grass, but when the time came for them to go to the butcher we’d always become attached to them. We knew they had to go but Mum would say she’d “talked to the butcher and he was giving us another lamb back”, nicely butchered in plastic bags. We ate the chops with the wisdom of country kids. That was the cycle. With our dairy farm friends it was often the ‘poddy’ calves they’d fed, that came home in ‘a freezer pack’

It was a hot mid-summer day and my brother and I (and maybe my sister?) arrived home on our bicycles from school. We were hot and when I heard a distressed bleating from our lamb, I saw the water tin we used for it had been overturned. I thought that might be why the lamb was upset but before I could refill it, I could see blood. One of its eyes were pecked out and around its bum, the rear soft bits of flesh were mauled. It still had its tail (we usually put a rubber ring on those so it would eventually drop off. I couldn’t just do the quick flick of a sharp pocket knife which was the accepted technique). On the fence only a few meters away sat a crow, which flapped away as we screamed hate at it.

We held the animal, lambs are all legs when young, comforting it’s anguished bleating but helpless without an adult. One of us must have run to tell Dad at the factory, and he soon fetched his .22 rifle and shot the lamb in the head. It trembled to a stop and we kept trembling. There must have been a dog barking in all that noise, we always had a dog.

There were a couple of crows sitting on the ground in the paddock watching, so in anger I asked if I could shoot them. I guess as the eldest I would have been trusted with the gun, but both my brother and I had been taught how to use the .22 and could hit tin-can-on-a-log targets pretty well. But bullets were expensive and our hunting, mostly for rabbits was with traps. The gun as a killing thing was still a bit alien, although we did both have airguns and the first sparrow I killed caused me anguish. The sparrows hopped around and fed on the fallen wheat near the factory store, and were easy to sneak up on. Usually they give cheep, a jump and flapped away most satisfactorily but this time, no. I carried it back in my hands and of course, we buried it in the garden.

I drew breath, and resting the gun on the fence post, shot one of the crows. It immediately flapped and circled on the ground and lay still. Shaking, I couldn’t shoot another and I don’t think my brother wanted to either. We buried the lamb.

By the time we’d done that, and Dad had returned to work, there was a flock of crows gathering around the dead one in the paddock. The dry yellow grass, black crows and afternoon heat all became mixed in a crow lament. The sound was scary and didn’t stop for a long time. I didn’t want to climb the fence and chase them away.

I remember tears when my Mother came home, she snarled ‘bastards’ or something surprising to my ears.

At the time I didn’t know that crows mate for life. 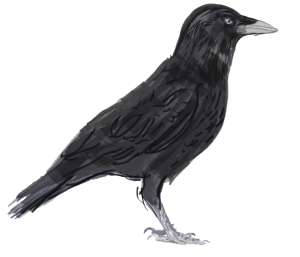 Crow realized God loved him-
Otherwise, he would have dropped dead.
So that was proved.
Crow reclined, marvelling, on his heart-beat.
And he realized that God spoke Crow-
Just existing was His revelation.
But what Loved the stones and spoke stone?
They seemed to exist too.
And what spoke that strange silence
After his clamour of caws faded?
And what loved the shot-pellets
That dribbled from those strung-up mummifying crows?
What spoke the silence of lead?
Crow realized there were two Gods-
One of them much bigger than the other
Loving his enemies
And having all the weapons. 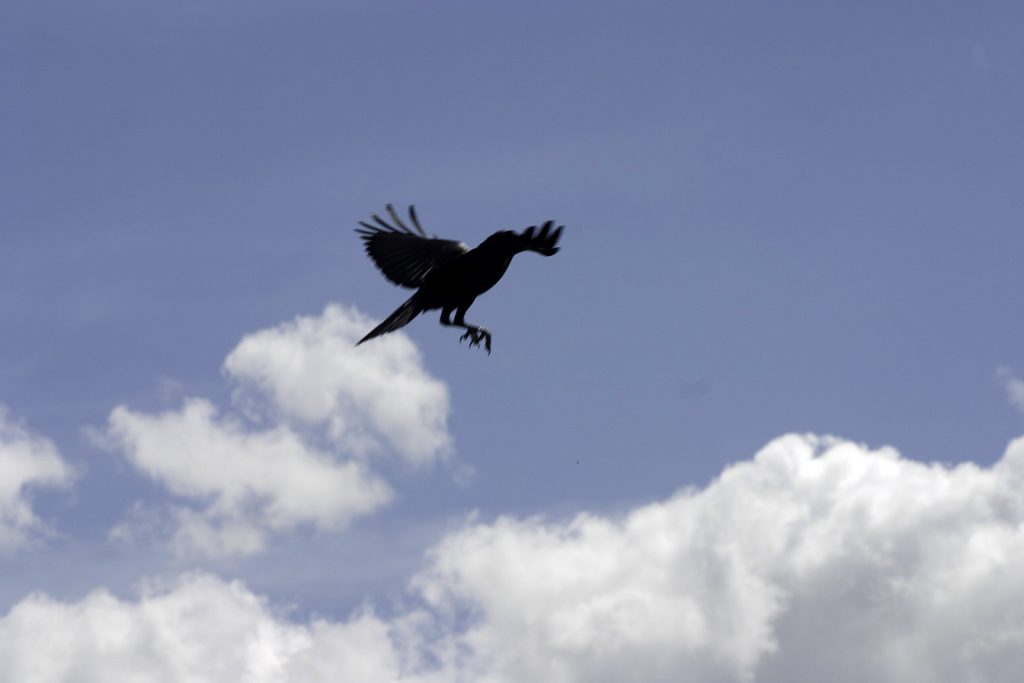 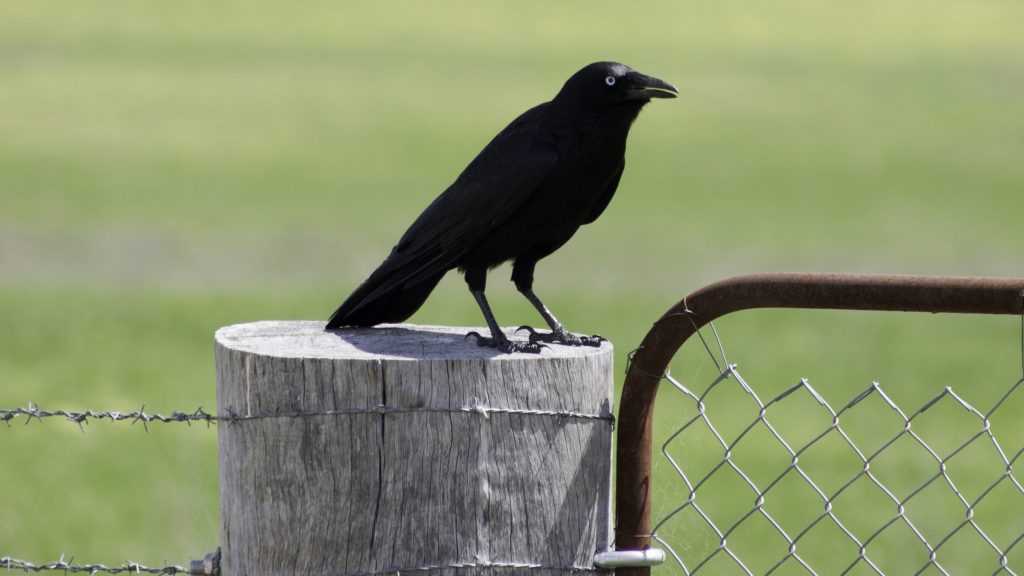 This film is an unauthorised copy (I think) of a BBC programme on Hughes which somehow sneaks past the problem of showing poetry on film, and adding images to his poems (see the other YouTube attempts for comparison. Aaargh!).

And I’ll leave you with this Alfred-Hitchcock-Tippi-Hedren-thought to help you sleep.  A crow tied to her shoulder, clearly BP (before Photoshop.) 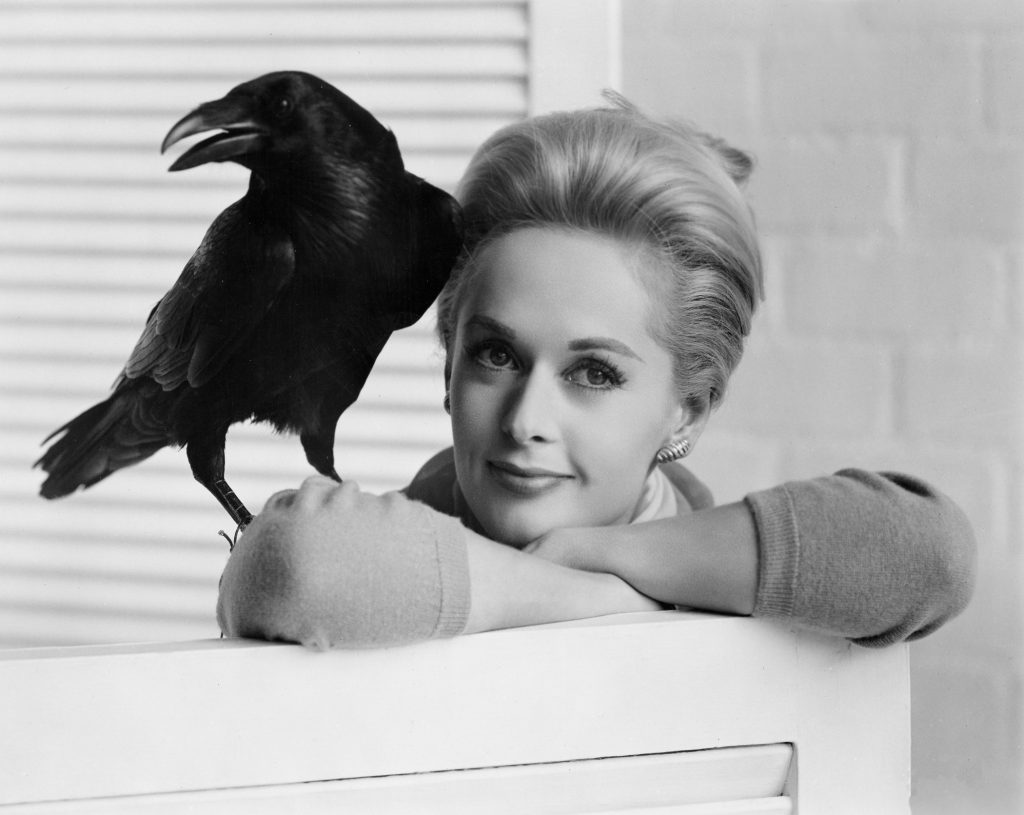 The Murder of Crows