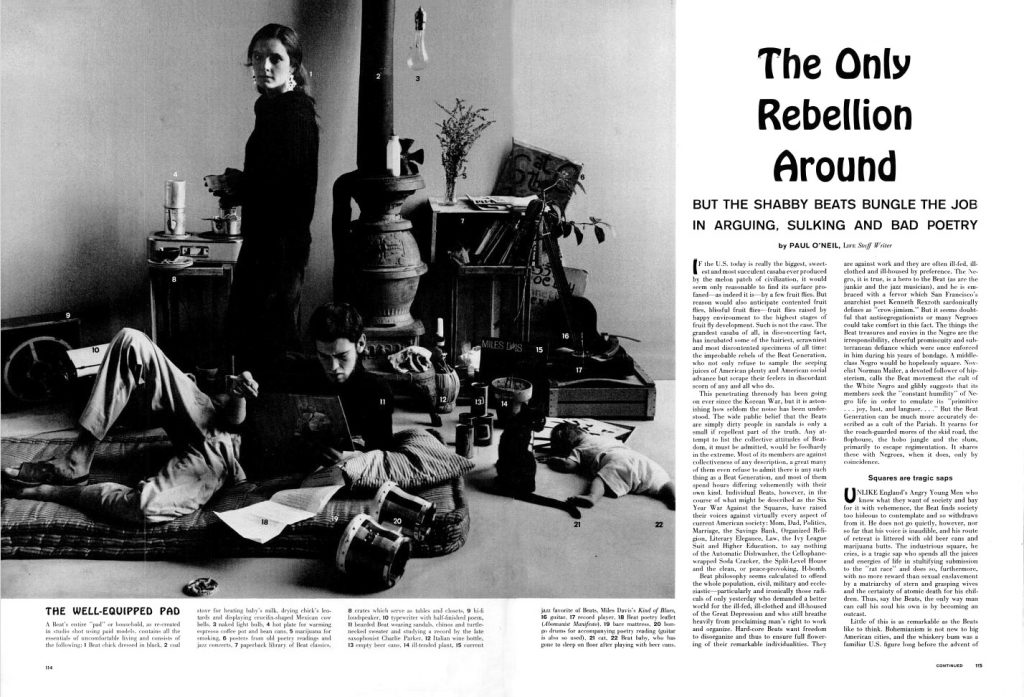 In his perceptive 2008 PhD dissertation on the importance of the San Francisco City Lights bookshop, James Gatewood quotes from a November 30 1959 LIFE magazine article about the Beat generation. The staff writer Paul O’Neill had either been commissioned to afront (LIFE was pretty conservative) or is himself afronted and goes on the attack on “some of the hairiest, scrawniest, and most discontented specimens of all time”. Hang on I said, that was me, I wanted to be Beat, did people really think that?

Gatewood says “Exuberant teenagers and anxious parents alike probably opened their copies of Life and read Paul O’Neil’s article, ‘The Only Rebellion Around”, with a mixture of curiosity, fascination and perhaps even disgust, pouring over images of unkempt men and starry-eyed women who were partying with reckless abandon in cities across the United States. One imagines the parents of an impressionable teenager hovering over the publication late after dinner one evening , engaged in hushed tones about these strange and fearsome creatures while their son or daughter strains to hear the conversation from a nearby room. While we must speculate on the reception of O’Neil’s article by American audiences, we need only read a few lines of the article itself to become immediately aware of O’Neil’s feelings toward his subject matter. He wrote the article as a hard-hitting expose promising his readers “penetrating insights and startling revelations into the inner world of the Beats”, their philosophy and the supposed”threat” they posed to upstanding citizens across the republic; the final product, however, is a ranting critique of these young men and women and the alternative lifestyles they had carved out for themselves.

Coupled with O’Neil’s vivid and unsparing descriptions of the men and women about whom he wrote, the portrait is unflattering to say the least. He likened the Beats to insects,”some of the hairiest, scrawniest, and most discontented specimens of all time,” whose repudiation of the affluence of postwar American society, which O’ Neil described as the”sweetest and most succulent casaba ever produced by the melon patch of civilization,” was proof positive of their own psychological deficiencies.
Whether they were grooving to the soulful sounds of cool jazz in the dark underground clubs of Greenwich Village, snapping their fingers in affirmation at a poetry reading in San Francisco, or getting high and dancing the night away with Negroes at a pad in Atlanta, O’Neil’s beret-wearing hipsters were malcontents whose all-out war on organized religion,”mom and dad,” higher education” and even the” cellophane-wrapped soda cracker” was by his estimation a tepid and self-gratifying response to the times in which they lived.

Less than ten years later I aspired to be a ‘beatnik’ with a ‘pad’ and ‘chick’ just like that. In my skinny leg trousers with black roll-neck skivvy, a scrawny beard that was really pale fluff on my chin (and on which I had to use my mother’s hair dye, making dark patches on my adolescent spotty skin) we went out into the night.

At our student parties, we were drinking cheap red wine from flagons (never beer for me), listening to blues and protest folk music (I don’t remember much jazz), in the flickering light of candles stuck in raffia wrapped chianti bottles. There was always someone reading Alan Ginsberg’s Howl, and we sniggered at the rude bits and raged along with him about injustice and war.

I had Kerouac’s ‘On The Road’ in a fashionably cheap paperback I bought from Melbourne’s equivalent of City Lights Bookshop, the Source Bookshop in Bourke Street .  I was reading Alan Watts on Zen and reckoned I was headed for cool. 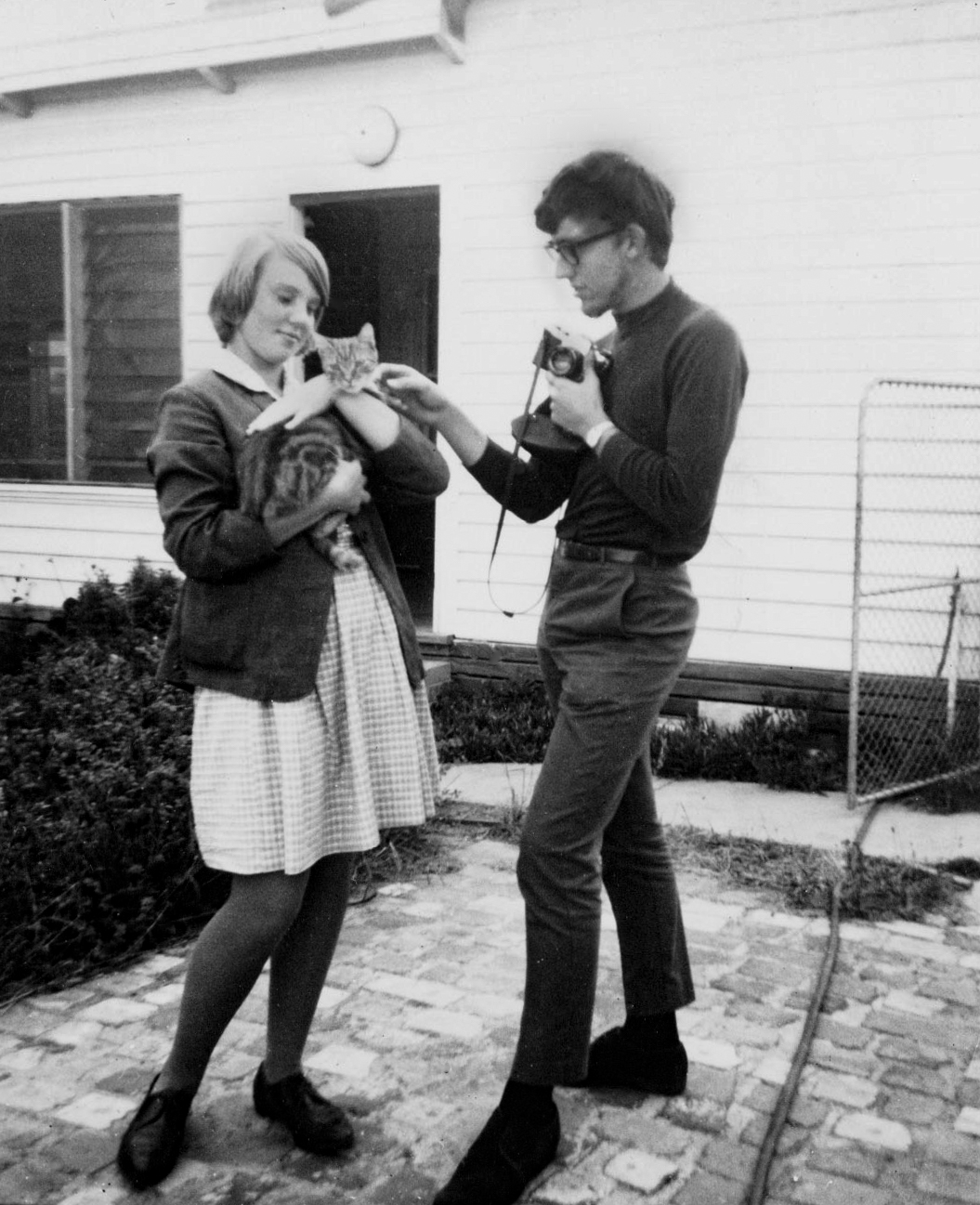 Moving out of living with my parents to renting with friends Gary, Geoff and Jim in Faraday Street Carlton, I had a better grasp of how that might look, and a more substantial beard. I left home the moment I had a paying job (at John Clemenger Advertising in St. Kilda Road), I can remember my mother was upset but insensitive as I was, I didn’t look back. I was headed for cheap Genevieve restaurant spaghetti meals with a glass of ‘claret’ and my first coin laundry. 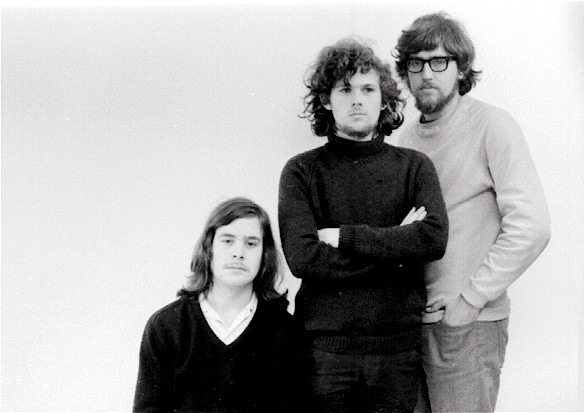