Sunbury Pop Festival 1972 - a document
Looking out at popular mass media when it's watching you.

You see different things from the inside, looking out at popular mass media when it’s watching you. This is a story about that. And about how in the 70’s some of us had the creative tools to tell our own stories, or at least talk back.The (big) American music industry gave us the film Woodstock and it excited us. They were our music heroes, and across a multi-split screen, the audience looked to be the same wanna-be counterculturalists as us (or that we aspired to be, given a bit of time-delay across the Pacific). Not all pop festivals in Australia were destined to be Woodstock,  however much they promised us. 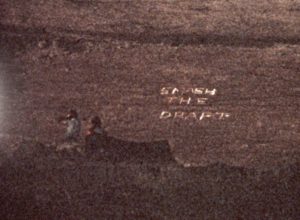 The sign on the hill, in white letters on the dry grass said SMASH THE DRAFT. It was in line with the stage and a TV wide angle view would have showed it clearly. I didn’t see it being removed but some moment before the TV coverage started, it changed to JESUS LOVES YOU. Was that considered more appropriate for the people at home (on the chance they’d see some naked hippy tits)? We were there however,  Soc Heddich has a photo of a Smash the Draft banner at the event. And to sleep in, I  brought a dome, how counterculture is that! (I didn’t have a tent.)So was this the end of the hippie era? Nah, everyone had got over that by then in the outside world, it’s just we didn’t now quite what to do next. Other than do a Moratorium march or two to stop the War. It was as one quote put it, “a mix of Utopia and Dystopia”. As a young working male, I had control of my life, money to spend (sometimes more carefully than others), girlfriends, creative projects and creative friends. Most of us were aware of how the music was changing, we were buying records, but instead of Top 40, we were listening to late night radio shows that for the first time played full album tracks.

The dystopian elements were the Vietnam War, conscription, the global oil crisis, third world overpopulation and famines, and the feeling that the world was pushing itself to the edge in so many ways.How did this pop festival sit in that conflicted world? Or did the young people around me just want to get drunk, naked and sing along for a couple of days. We knew that Some People thought Billy Thorpe was Crazy. But it was at Sunbury for the first that I heard the fans return an affirmative cry of “Suck more piss”.

Milesago mention a quote from Chain guitarist Phil Manning, he was interviewed by The Age in 2003, who was scathing in his assessment:

“It was a time when the hippie thing was declining and the drunken afternoons of too much beer, sun and basic rock developed. The music went from being experimental to being just moronic entertainment for yobbos.”

Maybe it was just a case that I lost my pop festival virginity to The Odyssey Festival at Wallacia  in 1971 ( that link is to a blow by blow description of Wallacia on Milesago. If you weren’t there, or not born yet, watch the video below and then read it and you’ll get the idea. That was only one year earlier, but very different to Sunbury.)

There’s a DVD available of the Channel 7 live broadcast and some extra footage. It was replayed in a longer format on the following Saturday. I set up my camera in front of my twenty inch TV set, and took some ‘kine’, the only way we could record TV at home. A cassette recorder captured the sound. It only deepened my dislike but helped my understanding of the event. That’s where the B&W footage of Benny Zable came from. No matter how much energy Benny put into it, it felt like he was performing in a different time.

Here’s my film from Wallacia.  I said on YouTube – I  did most of the editing in camera, with a bit of re-filming. I’ve left some of the splices for grunge sake. It was shown at the Melbourne Co-op and a few film nights but had stayed in the archive box, so it’s time to share it here.  I took my still camera but I was broke, and didn’t get a chance to buy more B&W film. I had only one cartridge of Super 8 Kodachrome so I decided on single framing, with short bursts of 4 fps. As a sound track at the time I played any music that was available (loud) but this is a track by Tully, who woke us up to the sunrise at Wallacia and seemed appropriate 46 years later. Thanks to Chapter Music for permission (www.chaptermusic.com) to use the track.

Here’s it is, with grubby Super8 texture intact. Watch it in HD if you can.