This cheap booklet (60c), with its thirty, centre-stapled pages reproduced in a typewriter font, was my introduction to Yevgeny Yevtushenko. It was first published in 1966 and was up to its 8th reprinting by 1967. The introduction says “the poems in this book were received too late to be included in Sun Books* New Works: The Bratsk Station by Yevtushenko”.
As Geoffrey Dutton records in his 1994 memoir Out in the Open.

“As the 1966  Festival (Adelaide) approached and the cables flew to and from Moscow, the pace of translation got hotter and hotter. Bratsk Station went off to Griffin Press. Igor (Mezhakoff-Korjakin , co-translator) came again so we could work on the shorter poems, sometimes for twenty hours a day. We gave this collection the title of one of the poems, The City of Yes and the City of No; there was no time to publish them as a book so they appeared in a typed booklet, which would go through eight editions in the next year. Printed and published in less than a week, it was one of the first examples in Australia of desktop publishing for serious literature.” 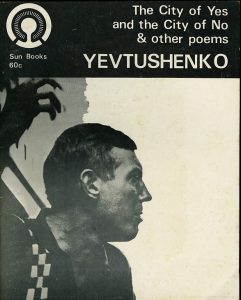 This cover wasn’t designed by Brian Sadgrove, but by “unknown”, if it was ‘designed’ at all. 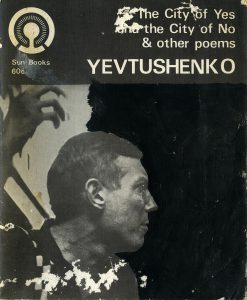 This is my copy devoured by, probably silverfish, in a box in the Bungendore shed. It had been hand painted (not by me surely?)

In 1967 we were in Yevtushenko frenzy. It was his mix of politics, and romanticism, and this booklet was all I could afford and was luckily considered the best introduction to the poet .
I fancy I saw him perform his poetry in Melbourne but when? I have a bootleg tape I made of Yevgeny and Kerry Dwyer performing his poems to rapturous applause.

I often quote bits of two poems from Yevtushenko , often enough to be boring, the beautiful opening poem in that booklet, Sleep, my beloved.  Which ends…

And I’ve misquoted these lines from the poem Breaking Up

I won’t say ‘forgive me’ because I have left you;
I ask pardon for one thing: I loved you before.

as “My first love, forgive me that I can call you first”.    (Which I’ve found is actually by Robert Kelly)

*The independent paperback publisher Sun Books was founded in 1965 by Geoffrey Dutton, Max Harris and Brian Stonier who had left Penguin Australia frustrated by their English employer’s lack of commitment to local content. Pooling their respective talents, the three men aspired to deliver quality paperbacks for the sophisticated Australian reader. A young Brian Sadgrove was appointed as Sun Book’s inaugural designer, charged with developing a distinctive, identifiable Australian identity for the fledgling imprint. His commitment to simplicity and modernity is reflected in the sans serif typography, restrained colour palette and bold Sun Book logo, an abstraction of the artist Lawrence Daws’ sketches of Aboriginal cave paintings.” Source.”]
(Jan has a lovely story about Yevtushenko and Australian champagne that I found in the Dutton book, she has included it on her Timeline website here.)