Let’s start with this Super 8 movie taken while I was visiting the Sydney Film Makers Co-op to talk about merging promotion of our film libraries.

The visit was in April 1972 – We’d just started the Melbourne Film co-op’s short film booking service (John Matthews was the ‘librarian’ )and we contacted the Sydney Co-op to see how we could work together. I flew (still a novelty for me) and stayed with newly wed Phillip Noyce and Jan Chapman. They were tolerant of my naivety, took me ‘sightseeing’, and the day I followed Phil around at the Sydney Uni was eventful in many ways. And meanwhile the second Apollo moon mission walked overhead. Now you might like to know more about the incident with the bolt cutters. Remember this was still during enforced conscription in Australia. 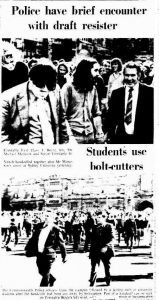 Image caption:  Police have brief encounter with draft resister. Constable First Class T. Boyle, left, Mr Michael Matteson and Senior Constable D. Veitch handcuffed together after Mr Matteson’s arrest at Sydney University yesterday. The Commonwealth Police officers leave the campus followed by a jeering mob of university students after the handcuffs had been cut away by bolt-cutters. Part of a handcuff can be seen on Constable Boyle’s left wrist.

A draft resister arrested by police today was freed by university students who cut through handcuffs linking him to two officers, then helped him escape.

Mr Michael Matteson, 24, sought for refusing to serve two years national service, was still at large tonight. Mr Matteson was being driven home after giving press interviews from a building near the centre of Sydney when two policemen leapt into the car while it was stopped at traffic lights and handcuffed him to themselves.

“Before they could get him out of the car. the driver drove straight into the university grounds”, the president of Sydney University’s Draft Resiters’ Union, Mr Ian Davis, said last night. Mr Matteson began yelling, “Help, draft resister”, “I’m Mike Matteson, the police have got me” and “Sanctuary”. When the car stopped, Mr Matteson and the two policemen got out and were immediately surrounded by students.

The students were reinforced by others who poured out of a rock concert in a nearby hall when it was announced that Mr Matteson was outside and needed help. An official announcement asking students to help Mr Matteson was made over the loudspeaker in the university library. Within 10 minutes, Mr Davis said, between 700 and 1,000 students were milling around the three men.

A student who took photographs of the scene, Mr Wayne Davies, said that some students began shouting for bolt cutters. Two students left and returned about 10 minutes later with a large pair of cutters. Several students held the police back, while the handcuffs were severed, Mr Matteson made off through the crowd and was out of sight by the time the two policemen, still with half a pair of handcuffs on their wrists, made their way out of the university grounds to students’ shouts of “no conscription”.
A Commonwealth Police spokesman said later that the policemen had been following Mr Matteson, who was being driven to the university. The spokesman said Mr Matteson called out to the driver of the car to drive on the campus. Police had the number of the car in which Mr Matteson had been travelling and were now searching for it, the spokesman said.
A NSW Police spokesman said later a report on the incident had been received and would be acted upon.

Mr Matteson has served two brief jail sentences since he failed to register for national service in 1968. Late last year he narrowly avoided capture when police raided a television studio where he had appeared on a live news program.
Later the Attorney-General, Senator Greenwood, said that to cut a law-breaker from police custody was a most serious offence.

That there was still strong feeling about Conscription and the sense that ‘big brother’ was taking people away, jumping into cars with handcuffs, knocking on doors of ‘safe houses’ in the night, helps explain the student solidarity at the Matteson incident.

In 1972 I was 25, a conscientious objector to the Vietnam war. My ‘marble’ was drawn for call up when I was 18 (I had a long conversation with both my parents who had ‘served’ in WWII and they encouraged me to do what I thought was best, especially my father who was in the fighting in New Guinea (as a radio operator) and  never said anything positive to me about his experiences. He came back with some Japanese souvenirs, field telephones which we played with as kids and the few photographs of them bringing in Japanese prisoners and his army mates felt real enough. Whereas my mother, like many other women found the experience liberating and worked in the transport division, driving staff vehicles and search light trucks. They married as soon as they were demobilised and I was born in June 1947.

There were many of my friends who felt moved to be objectors. I was listed to attest to two friends ‘consciences’ in court but long before the end of 1972 when Conscription was abolished it, was clear that the government was trying to avoid court cases and they were no longer handing out prison sentences. When I went to enrol and state my objections to the psychologist and said that I wasn’t going into the army and why. I remember he scoffed but smiled. Then after passing all the other health tests – including 20/20 vision for my eye-glassed eyes. I was sent home and a few weeks later told I was medically unfit.
A young doctor friend who had advised me staying up for a couple of nights before the medical so that I looked ‘ratshit’ and advised to mention every child hood disease I’d ever had, was suddenly worried and sent me to a specialist who declared me healthy, and smiled.

I somehow felt cheated out of a chance to state my objection to what was clearly not our war but it was conflicted when a school friend came back with his legs blown off by a land mine (while he was on kitchen duty collecting water in buckets from a stream).

Apparently “The Aquarius Foundation running the Canberra arts festival found itself in debt to the tune of $20,000, and scrounged together the cash to fund the film’s completion, in the hope that a tour of student campuses could redeem the festival debt and the costs of the film’s production.
Pepsi provided a thousand dollars required for the interlocked 16mm projectors.

We’d seen split screens used in the Woodstock movie in 1969 and while it’s a commonplace and cheap to do now it seemed pretty special at the time. 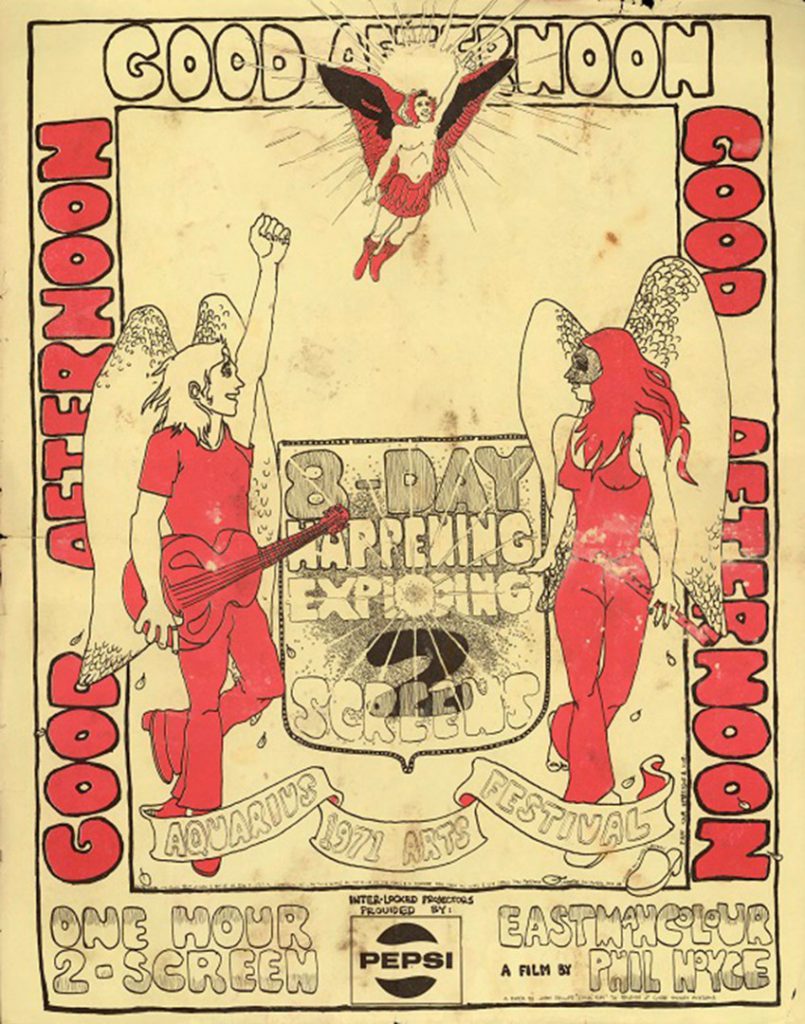 The main feature image shows Phillip and friends setting up a ‘cinemascope’ wide screen for the two projector image in the Sydney Film Co-op – then in Kent Street Sydney.