Walwa
Growing up on a river bank

European settlers first began to arrive here in 1837 and the Walwa township was surveyed by 1870. Our family moved there from Melbourne in 1951 when I was four years old.
Walwa is pronounced as it is spelled with the only variation I remember as being Wall-Wah. We were told as kids it was an Aboriginal word meaning ‘a meeting of waters’, but not having ever seen an aborigine that didn’t mean much.

The river is the Murray but of course the native Australians didn’t call it that and it had different names along its length. The river still looks much like that photo above from this point upstream but 30 kilometers downstream it disappears into the Hume Weir, dammed near Albury in 1936.

Mounted on canvas, this rolled map was a special childhood object (and I’ve kept it safe after many house moves). I knew all those river bends, the rock types and where the granite hills changed from red to grey and where to find its minerals, tin and felspar.  We lived on the edge of the Upper Ordovician facing the Alluvial flats. Click to see it larger.

My father was employed as the engineer at the Walwa Butter Factory, the buildings you see along the horizontal road in the middle of the image above. The town is the white buildings in the middle distance. The factory is actually closer to the town of Jingellic in NSW where I went to school (it’s spelt as Jinjellic on the map above).

This is where I grew up.

Here’s some images from an older page which has descriptions. There’s a bit more about Walwa in this Another Country Diary post  (new window) from August 2005. There will be more of course. 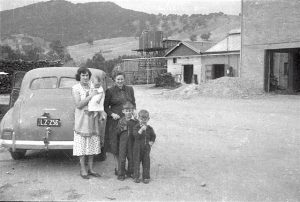 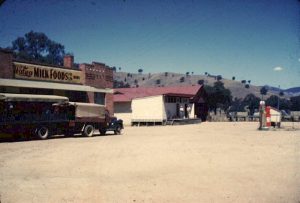 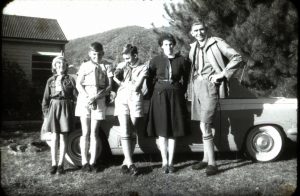 I’ll add some of my Facebook posts here as well, this was during the recent bushfires.

While Walwa and Jingellic, where I grew up, are under evacuate orders, I offer this view of the Murray River Valley there. I have lots of other bits from visits but this grassy hill says something about vulnerability. It was taken in early January 1969, from a Standard 8mm film I transferred myself. (So it’s low resolution, so watch it small). It shows Margaret Bourke , Susan Hayman and Rikki Bewley (that’s her on the slope suffering from arthritis and quite sick of walking).The Black & White image at the end would have been maybe 15 years earlier, and was probably taken by me or my father. It doesn’t include brother Phillip or I, it shows my sister Jill Branagan, my mother on one elbow, and some friends of ours. It looks back past the Butter Factory towards Walwa township.

There’s a muddy island in lower foreground centre, and in the wild bushfires of 1952, the kids who lived along the three houses on that factory road where taken there, wading through the water the fires raced over the hills to the right. Over our shoulders, we watched the fire explode along the crest of the hill and raced across the dry grass as we looked back. The factory and homes were saved. My mother was driving a water-cart and I remember that she was always remorseful because that day she ran over our pet dog in the panic.