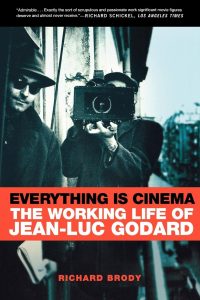 How did Jean-Luc Godard change how I thought about cinema?

You will know how he changed your thinking (maybe. There’s a generation of film-goers who have never heard of him.) At the risk of a lot of “yeah, me too” “yeah, didn’t everybody” I’m moved to tease out why I think about, and make film like I do, because of Godard. The prompt was Richard Brody’s book that I encourage you to read. It’s exhaustive in its examination of French politics at the time and the intellectuals that Godard desperately wanted to be part of. It helped me understand why the French held him in such regard.

When I moved to live in the country for twenty years I lost touch with ‘art-house’ cinema and the films of Godard from Vivre sa Vie onwards. No more Film Festivals and that intense pressure cooking of the winter weeks at the Palais. No more skipping off from work at the agency to see day time sessions that had an audience of a half dozen. (They were some of the best ‘new cinema’ but you had no-one to talk to about it afterwards.) Much of my earlier cinema going was solitary, which allowed me to concentrate, or walk out, and enhanced the impact.

But he was God.   This is from a Standard 8 lowres transfer from a 1970 film I pretentiously called ‘Ribbon of dream after quote by Orson Welles ‘The cinema has no boundary: it is a ribbon of dream’.

Recently I took my thirty year old daughter Aurore to see Pierrot le Fou while her husband minded the baby. It was father-daughter time and I was anxious to see what she thought about it afterwards. Did she like it? “Yes, just like Tarantino” she said, so she got it. We could then talk about how Godard changed cinema into a different kind of narrative.

And it started with Breathless .  As Richard Brody points out that’s a poor translation from French: À bout de souffle; “out of breath” is a lot darker than something that left you ‘breathless’ with excitement.


Let me quote some other passages from Brody, that I bookmarked.

“After Breathless, most other new films seemed instantly old-fashioned. The triumph of Godard’s longtime friend François Truffaut at the 1959 Cannes festival with The 400 Blows, had announced to the world the cinematic sea change effected by a group of critics- turned- filmmakers already known in France by the journalistic label of ‘la nouvelle vague’, the New Wave. But The 400 Blows was only the setup. Breathless was the knockout blow. If The 400 Blows was the February revolution, Breathless was October.”

“The film was a generational watershed. Breathless is the cornerstone film of the French New Wave because it is the one that explicitly claims the group’s intellectual heritage (American movies, modern literature, a polemical yet highly rhetorical critical style) while at the same time brandishing the group’s hectic, threadbare, disreputable social circumstances.

As Godard said, “We barged into the cinema like cavemen into the Versailles of Louis the Fifteenth.”

“Breathless identified the virtues and vices, the ideas and the practices of the New Wave with his own. Moreover, with Breathless, Godard achieved for the cinema, himself, and his movement what Sartre had accomplished in the late 1940s for philosophy, himself, and existentialism: he made his movement the emblem of the times, defined his medium as the one of the moment, and personally became its exemplary figure. Godard instantly became the embodiment of cinema, the New Wave, intellectual fashion, and intellectualism as fashion. Sartre carried a generation with him in the name of the philosophy with which he was personally identified. Godard did the same for the cinema, his ideas about it, and himself; he not only depicted and enacted the struggles of his generation, he ignited its ambitions, turning it into a group that wanted nothing more than to make films, and to make them as he did.”

“Viewers and readers, upon their initiation into the film’s esoterica, themselves popularized the advanced cinematic philosophy that Breathless represented, becoming the first citizens of the new republic the film heralded: the republic of media self-consciousness, of the fusion of communication with theories of communication, of criticism with art.”

“Godard saw that the obstacle to his “home movies” was financial. He believed that he would have no choice but to create and distribute them on his own, outside the prevailing system, and that he would have to make them in video because it was cheaper: tapes are cheaper per minute than film, require no processing, and can be reused. He imagined that his videos could be rented by small groups of people to watch together, and he understood that this was not likely to be much of a business. “That is why I clearly envision taking a part-time job,” he noted, although doing so was never a serious option.”

“It follows, then, that Godard’s negative view of the current state of the cinema should lead him to dismay regarding contemporary life as a whole. Young filmmakers, he said, “don’t know the past,” and Godard finds this loss of connection to the past embodied—of course—in the cinema, notably in film technology: “With digital, there is no past, not even technically.” To see a previous shot, one strikes a key, he explains.

“It doesn’t take any time to get there, the time to unspool in reverse, the time to go backward.
You’re there at once. There’s an entire time that no longer exists, that has been suppressed.” 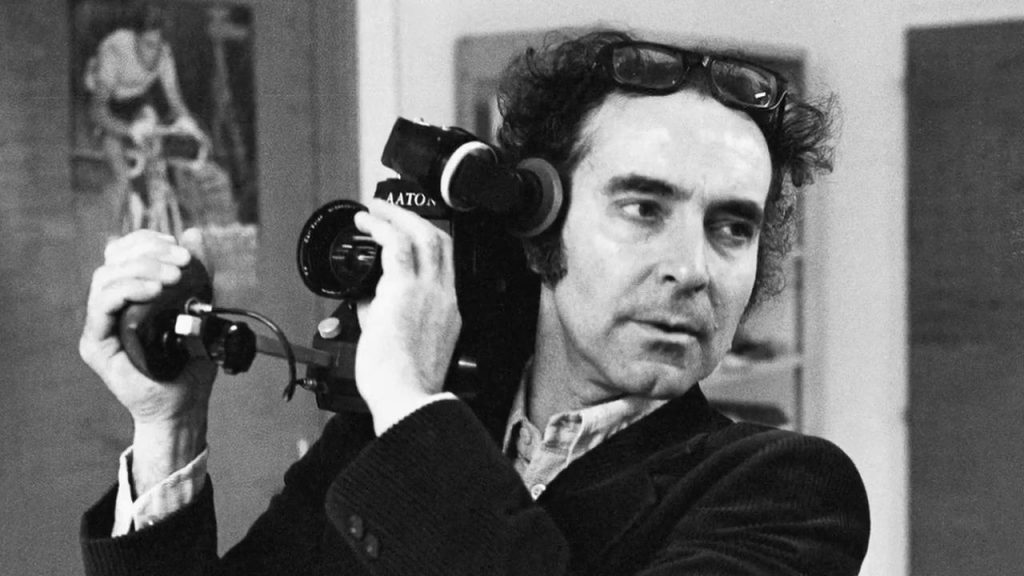 Godard’s film making gave rise to a camera we all thought we had to have, the 35mm (and for us ‘non-commercial’ filmmakers -16mm) Aaton.  The Eclair NPR was easier to get and it’s place in history is told in a documentary elsewhere here. The camera that changed the world.  The Brody book tells how he sponsored and hounded the Aaton creator Jean-Pierre Beauviala ( who died on April 8th of 2019 in his apartment in Paris). I don’t know what Godard would have thought about Beauviala’s digital cameras. His ‘pro’ video filming was with broadcast Sony Betacam. There’s a wonderful interview here between Godard and Beauviala that gives you a lot of background and understanding to that love-hate relationship.

“The company name came from Aton, the primal Egyptian god cited in Freud’s Moses and Monotheism, but it was spelled with two A s so it would come first in the professional telephone listings.”

We all followed with eagerness Godard’s move to video and the concept of producing first for television.  We were probably ahead of him in many ways technically but we appreciated his work methods. The artist creating in his video studio workshop, the clunky video graphics that we’d long surpassed, but being able to do it all yourself was important. 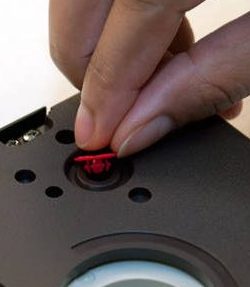 Brody tells how at one stage Godard was “… afraid to call (Margueritte) Duras himself because he thought that she was angry at him. When Karmitz called Duras on Godard’s behalf, she asked what reason she might have to be angry with him. “Because,” the producer said, “he sent you a letter and enclosed a daisy [une marguerite],” but received no response. “There was no daisy,” Duras said, “there was a button, the kind you find on underwear.” It turned out that Godard had sent Duras a little round clip that was used for recording on large-format video cassettes; with its four leaves, it looked like both a daisy and an underwear button.”