Sony Mavica CD-1000, June 2000
the alt.manual for a Multimedia innovator

This is a document from 2000, an important time in digital image tools development, and I’ve left it as I wrote it online. That’s the only way you’ll get the feel for what was happening at the time, and it reflects my position then as an ‘influencer’ because of my MultiMedia Magazine and print media days.

What’s hard to remember is that we had little option for portable digital image storage other than floppy disk, no SD memory cards although Sony did have a digital memory stick that you could use in parallel with the optical CD-R.

Boy, that’s an absolute dud of a manual for a near A$3000 camera. Especially for someone who wants to take more than snapshots. I’m finding great things about the CD-1000 that aren’t mentioned and faults that you should know about if you’re  planning to buy one. This might be useful stuff if you’ve bought a CD-1000 and are still confused. (I’ll add more experiences over time and welcome your comments as well).

There’s an assembled complete listing of the Specs for the CD-1000 (it was a pop-up window now just scroll down) but before I haul through the features, you really need to position this camera in its place in the digital imaging market.

If you’re just looking for a cool toy, or the cheapest digital storage format outside video tape then you’ll like the CD-1000 (and it’s later incarnations). If want to take high quality pictures for prints or publication with your camera, and you’ve used 35mm or larger format cameras, then you’ll probably skip this camera based on its specs, looking for higher resolutions. (The quoted 2.1 megapixels is a bit passè.)

If you are still sniffing around looking for a change to digital, then you might be impressed by the 36 bit colour depth, and with the uncompressed TIFF format and very low compressed JPEGs. But even some of the smaller Sony cameras have a better than 1600 x 1200 resolution. If, like me, you were attracted by the long zoom and the stabiliser that lets you use it handheld, it’s balanced by the average wide angle ability and you need the (expensive) wide angle adaptor to work inside smaller spaces.

What about the attraction of Stills and Movie and Sound in the one camera?
When you hear that the movie mode only records 15 secs in reasonable quality, the movie and sound seems just a novelty, (the internal RAM memory is too small to record longer sequences before writing to disk).

Then if you handle it, you find that operating it is slow, fiddly and quirky.

So what is it? I’m not sure Sony know. I think it’s another case of ‘build it and they will come’. For a start it’s labeled Mavica, and designed to fit in the range that includes the Sony large floppy disk storage cameras. Mavica is Sony’s mid user range and I’m sure they saw the recordable CD as only slightly more fiddly than floppy disks, and heaps more useful. This might have been seen as a useful snapshot camera for business use, but it’s far too bulky and fragile for most amateur use.

It’s a camera that will probably find a number of niche markets with people using just one or a few of it’s features. No, this isn’t point and shoot, it is a thinking persons camera, for static rather than action shooting and probably a tripod based one. If you’ve used any good digital video camera and you’ve gone past auto point-and-shoot to manipulate the manual controls, then you’ll be familiar with much on this camera and use it for the same reasons.

The CD-1000 has enough flexibility to adapt to many users needs and while I’m disappointed in many areas such as the resolution, I’m more than happy with my purchase and the way it has fitted into my ‘notetaking/diary’ use of images. And it seems to fit that use well. If you’re producing web based or screen resolution images there’s a lot you’ll like about this camera.

I’ve assembled some pros and cons and points that aren’t explained in the manual that I’ll add too in time. If you’ve comments I’d love to hear them. 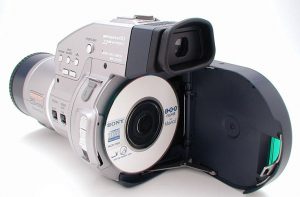 Yep, that’s how to hold it.
This is Sony’s feature list from the sonystyle
site (long gone)