In 1967 I was asked if I’d run a film history / film making class at Burwood High School, by English teacher Robin Hall. (I think that was how it happened.) I was a student at RMIT, and I enjoyed our Film Studies classes there, which were held at the State Film Centre library. It was all very classical National Film Board of Canada, early British film documentaries and I borrowed the films to provide the content for screenings at the Film Club. Then we started making our own (then Standard 8mm) movies, I hope it was a co-operative effort but a lot of the stills show Fred with the camera, so maybe I controlled stuff. It was always an anxious time when I picked up the 8mm reels from the lab, the expectations were high but we all seemed to enjoy the process when we screened them. 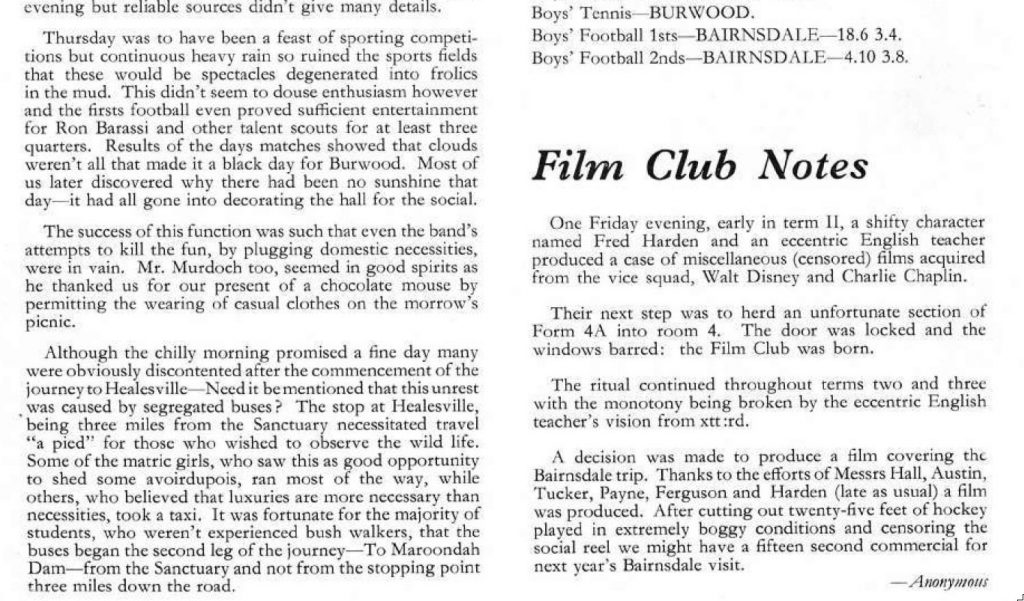 I was living then, just across the road from the High School, in a fibro bungalow behind what had been my parent’s house that faced the Burwood Drive-in screen. They sold to a friend of my brother. I needed a room, and for little rent I had a space that offered a small studio with a white ‘cyc’ back ground, a bed and a space for a jug and coffee making. It proved to be a perfect private place to have girlfriends around.

In a comment on showing her the “Line’ video, my first ‘real’ girlfriend, Margaret, and who I met at Burwood and years later was to be my wife, said… “I do remember The Line. Always keen on a bit of political protest!” and gave me another link to fill in lost memories -“There’s a Facebook group for ex Burwood High students. Someone recently has been scanning and posting old magazines. I saw the one for which you did all the photos… 1967 or 68. The page is called ‘Burwood High School’ on Facebook.”

Teen age rebellion with a nod to Lindsay Anderson’s IF which we all identified with at the time. About all the things that really mattered – a segregated school ground, strict uniforms rules…Watch it small, it’s a low res Std 8, may never get another transfer(?). 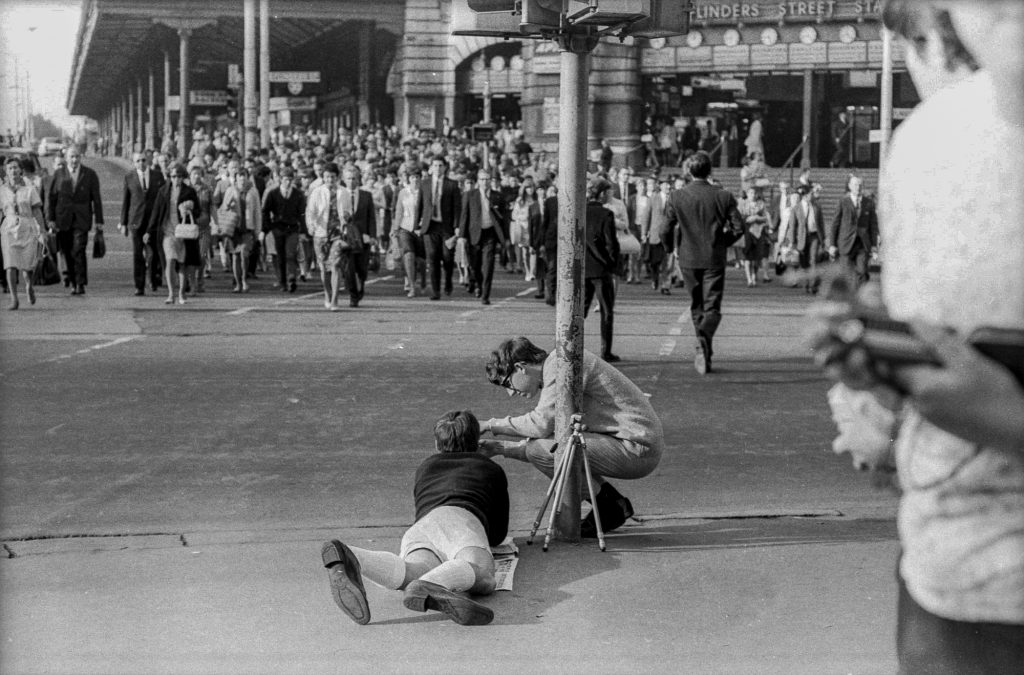 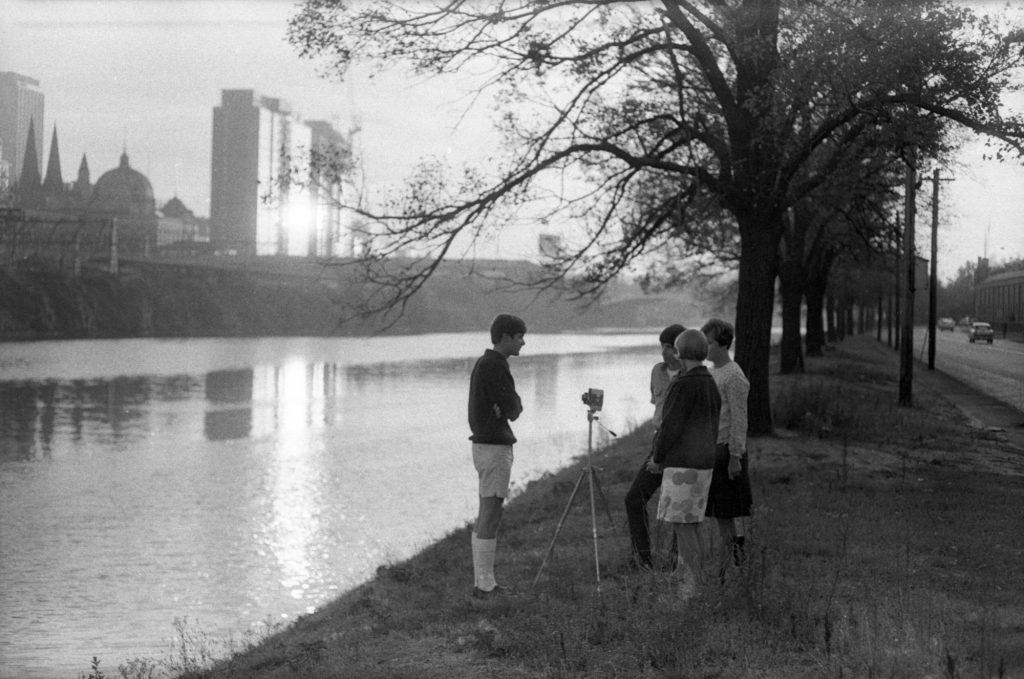 Somehow I knew that this group film (always called just “City”) couldn’t be edited on the Standard 8 original, so I just assembled it to show to the club members and that meant it survived unscratched waiting for a digital edit years later (43+ years later).  It was meant to be cut to a soundtrack like the other classic City symphony films I had shown them.  I know we talked about what music it should have, (we thought symphonic Aaron Copeland old fashioned) and thought it should be something spacey like Pink Floyd Ummagumma but that album (which I used on a Super 8 skiing trip film where it was on constant replay on cassette ) was much later.

The high quality transfer will come later. And then I’ll re-edit and retouch. ‘City’ did have a theme. After the set piece of the city waking up, it was ‘have and have nots’, old guys scrounging through bins, then slum suburbs of Port Melbourne and Fitzroy(?) and contrasted with Toorak and South Yarra apartments, luxury cars, kids playing in both places. I remember filming some of the sequences but thankfully there are pictures of the students using the camera, and even me as an extra, buying a newspaper, so I didn’t entirely monopolise the camera role. We can date it exactly because I photographed the date on the poster for that Saturday’s The Truth – SEX IN MASSAGE PARLOURS. Shock, horror.
But these were good middle class kids who wouldn’t have normally gone to places like a Port Melbourne slum being demolished. We got invited inside at one place (with the budgie cage on the outside wall). I remember the girls went home at lunchtime leaving just a couple of us ‘boys’ to go into the night. We started on the Yarra bank with an in camera dissolve (thinking this might continue throughout. But the process – fadeout, backwind, fade in was clearly going to slow us down so it’s there now as an obvious effect.) Of course it’s now easy to reverse the action so that’s my contribution to the ‘mood’ of the film at the end. I like the ‘street’ kids. 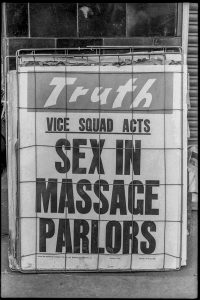 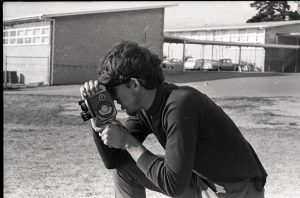 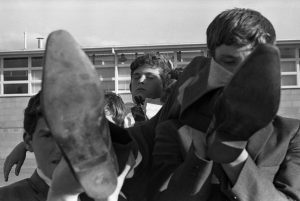 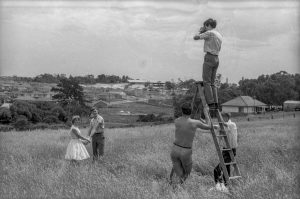 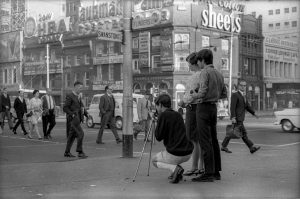 Below are Frames from “City” (lowres Std 8 captures) Images open in lightbox (best way to view these on mobile).

I can’t recall seeing this at RMIT but bits of it have stuck (or is it that much seems just clichéd after all this time.)

“Made in 1939. Directed and photographed by Ralph Steiner and Willard Van Dyke based on a treatment by Lewis Mumford, which was in turn based on an outline by Pare Lorentz. Aaron Copland wrote the musical score and Morris Carnovsky provided the narration.”