While being my favourite memory aid, the longer you leave recorded ‘media’ (film, video, photographs), the harder it is to remember  and extract the ‘facts’ about them later.  Screening/viewing them often helps a bit, sharing and talking about them is good, but they don’t carry (much) metadata with them,  perhaps a scribble on the reverse, a pental pen note on the film can or video cassette. This is important especially after the creator of the ‘things’ dies. Or the custodian loses their mind.

There is something reassuring however, in that they gain historical value and wider interest because they’ve stayed there in the archive unseen for years, and develop a resonance for somebody else who may uncover their secret messages. And in the case of film, if they’ve been unscreened and unscanned they’ve usually maintained their physical quality. There’s drying, and shrinkage which means you often can’t project them, they twist so even a hand wind film viewer stresses them (digital scans are kinder, usually one-pass through a roller only or a single sprocketed pathway).
Then there’s decay. Vinegar syndrome has started to attack these particular Standard 8mm examples, and yesterday, while I was editing/ handling the reels, the fumes got to me (again). A sudden headache and (even more than usual) blurred eyes. Vinegar Syndrome is something you can slow down but not stop, so there’s a deadline attached to that cardboard box which hold’s Dr Woods home movies.

I should know better but it’s still an unreasonable frustration to find there are recent generations that don’t have any internet ‘presence’ or history available for searching online. The would-be historian first goes through the process of the National Library ‘Trove’ collection of newspapers, then to physical library catalogues, and trade registers if the person was in business or would have made ‘news’. That list of publications cut out when copyright laws stopped the Library digitising newspapers in 1955. Individual publications still have their own archives but usually charge for access (The Age and SMH) and it means a physical search through bound volumes.
Online searches as you know are only as good as the questions you ask, how well they were catalogued, or what you search for. This story is about a search for someone I only knew from a name on a scrap of letterhead note paper, tucked inside a cardboard box.

It must have been in the early seventies when I was visiting a relative I’m sure was my mother’s niece Eileen (Davis) who we knew as Auntie Eileen. She died many years ago, but she was a favourite of ours as kids. I had just started making 8mm films, and she asked if I’d like to have the collection of film cans and reels taken by her late employer, Doctor Woods. Eileen had worked as his receptionist for many years. She told me that the doctor’s family said they didn’t want them (!) and she had asked for lovely silver metal vintage film projector with spidery arms as a keepsake. I think she also had a camera.  I clearly didn’t get all of the films, but she filled up a cardboard box and I carried it around  as I moved from house to house for over 50 years. 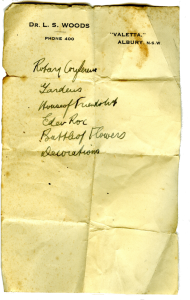 One of the reels was marked ‘Berlin’, and part of four reels of what was  (outside his short WW2 deployment) his only filmed European trip. He went with Rotarian friends to a Rotary Conference held in pre-war in Nice. I screened that reel early enough to make me realise that there was real historical interest in this collection, and I should look after it (and ‘assemble it” somehow).
I was most attracted to the Albury reels, which were all marked with titles and some dates. Maybe it was because I grew up on the Murray River, not that far away, and Albury was our closest ‘big town’. I felt an affinity with the images of the doctor’s two sons growing up, swimming in the river, dressing up and playing (now politically incorrect) Cowboys and Indians with friends in the back yard.

It was always my intention to donate them to the Film and Sound Archive. However I knew the problems of donating to any archive. Dumping a box of grandpa’s movies on them without giving any context,  or indication of how good/relevant or interesting the contents are, means they’ll probably sit uncatalogued forever. Now I’m planning to give them to ACMI in Melbourne  as part of my own personal collections, and this is part of my cataloguing . 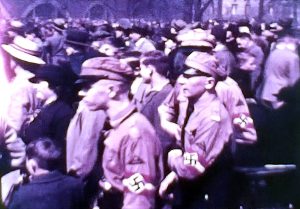 In the Berlin reel there was a surprise splash of faded colour,  everything other than swastikas red, white and black. It was just about 20 feet of Agfacolor in the 200 ft roll which is otherwise all black and white. It shows ,  just as he titled it, ‘Hitler’s March’.

I’d like to think I found the family reels as significant at the time, but I was developing my ‘home movie aesthetic’ – which believes that even home movies denounced as boring, always have an interest if you wait for it.  Clearly I was not interested enough to project them all to view in detail (which certainly helped avoid projection scratches, even with my careful handling). I really only ‘discovered’ them when I transferred them to digital in low resolution this year (2019). I’m still waiting on the opportunity to get higher quality scans done and to retouch and renovate them but this story is my attempt to start giving those tiny images the needed context an archive requires.
Writing this has stretched to fit the unlimited web ‘space’ so I’ll create separate chapters or Parts as I do this. If it jumps around a bit while you are reading, I’m probably still editing, it will be more ordered as I finish. I’m considering a structure like the menu below. I do want you to follow through this process, so I’ve added some idea of what these will contain to grab your interest. All of these are illustrated with still frames or short movie sequences that I’ve kept small for quality reasons. The higher quality ones will be around on Vimeo later.

This runs 17 mins and is one of the composite family reels.  In the opening ‘Daily Drive’ we see Dr Cleaver Woods and wife Margaret Woods (driving with gloves), then kids in the backyard – Cowboys and Indians, boxing – with anxious mum watching, playing cricket, riding bikes too big for you. In a staged and lit interior sequence ‘Seen in Valetta’,  it starts with Cleaver at the piano, grandma knitting and reading to kids, another older couple, stamp albums, piano practice. A colour sequence through the car windscreen of Drive to Basin Creek, a chop picnic, a brother’s wedding, and ends with car, kids and wattle.

Sub Menu
Doctor Woods – Part 1.  Who are you L.S.Woods?
This is what I’ve found from archives and contributions, from the reports of general meetings of clubs and societies, obituaries, autopsies, published  fame and notoriety, and things he’d probably like to forget – like the Pyjama Girl Case.
Doctor Woods – Part 2. Albury
Looking at the town of Albury and linking its events to those that are in two films, Views around Albury and  Shots at Random  around Albury.
Doctor Woods – Part 3. Becoming a Filmmaker
His first cameras, learning the craft, titles (thank you) and then losing the rigour and becoming a home movie maker. Splices and dirty edges.
Doctor Woods – Part 4. A country doctor’s life
The family movies. The people he clearly loved, what interested him – (which at the end of his life – was Merimbula with his fishing mates )