The promise was The first multimedia guide written by humans for humans and it was spread across the front page. The banner was catchy, colourful and the graphic promised fun. The eight pages of coloured broadsheet delivered most of that promise. Now, two weeks on, and the SYTE agenda is becoming clearer.

When Tony Sarno left the computer section of the Sydney Morning Herald to edit The Australian’s computer pages, it was hard to see what he could do to improve what was the biggest weekly computer section in any of the national daily newspapers. Sure there was often a stupid story or two pulled off the wire services, and it seemed like many of the sub-editors had no computer knowledge judging by the laughable errors. But the Tuesday Australian had the best computer job classifieds, and gobbled up the bulk of the computer industry’s press advertising budgets. It was dominant and unassailable.
Well, Tony has added all the things the section didn’t have, and has built a monster. Tuesday’s The Australian Computer & High Technology section is too good to be a weekly, and puts many of the monthly computer mags to shame.

You could explain it as being in the right place at the right time. There has been a boom in the personal computer market, in CD-ROM publishing, and there is wide public interest in the phenomena of the Internet and the Web. But that doesn’t explain why the Sydney Morning Herald computer section has withered, and even it’s Melbourne sister The Age struggles each week only buoyed up by a few pages of job classifieds. The Australian Computer section goes from strength to strength.
Tony seems to have clearly decided that the Tuesday paper’s focus is towards the business readership. The need for current product information, and the job moves and industry manoeuvring can be handled better in a newspaper than anywhere else. 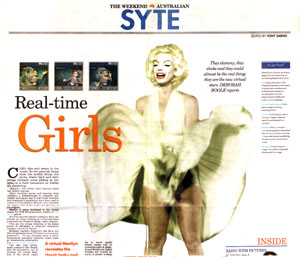 But, it’s pretty boring for a general audience interested in computers or awed by the whole process of digital convergence, and that’s the target audience for SYTE.
The new section will certainly build weekend circulation, attracting some of the general Tuesday readers to the Saturday edition as well. But, I’m sure the hope is that SYTE will attract a new audience, those who are computer shy and looking for that multimedia guide written by humans for humans. Then there’s the harder job of turning those people who only buy Saturday’s Weekend Australian for a good weekend read, onto the computer and multimedia phenomena around them.

As I said about the first issue, the different needs are all pulling the content around. The context says one thing,- it’s in the Weekend Australian, different from the weekday daily. The front page banner promises an non-technical ‘human’ explanation of the phenomena but the computer speak is still there. The layout mixes straight newspaper with magazine conventions and confuses both. (Can you get the excitement of good magazine design on a broadsheet page?)

That’s where I think my dilemma with SYTE lies. It’s not a magazine, although if the same content, designed by a good art director in an A4 sized glossy magazine with paper that didn’t bleed through came out every week, I’d buy it. Getting used to the fact that this is a newspaper feature section and will always be so, may take some time.

The writing is good, there’s columnists such as David Frith and Murray Spencer (who is not frightened to call an Australian made CD-ROM a dud), and Douglas Rushkoff is sure to be a celebrity plus. Jackie Cooper sits better here than in the Tuesday section, but many of the other stories could have come straight from the regular The Australian Computer pages and I guess that’s the strategy, they will eventually move here. I’m sure Tony is conscious of not cannibalising that successful formula, but it’s going to be difficult to not have Tuesday’s stories repeated in SYTE, especially if the local industry developments and multimedia makers are going to be the strength of the media coverage.

And the hypertext breakouts? I find them confusing when they are just a glossary especially when the explanation doesn’t relate to the way the term is used in the story. They do work as a device to keep messy contact details and long URLs out of the text, but I find them just another design element that fights for attention. Maybe the answer is to make more of them, adding pictures and extra information. There’s no print equivalent to the way hypertext works on screen, where information is hidden until you ask for it (although Chris Waller does a creditable job with the links in 21c).

I think Tony Sarno has created another monster, this one may be Godzilla and stomp across standard newspaper conventions, and it might have to battle to win its own audience. On the positive side, almost like Godzilla, there’s going to be a new episode every week and that’s a lot of opportunity to get it right. Many new monthly magazines die before they get the same number of issues out as SYTE will have in just the next two months.

I’ve asked my newsagent to add The Weekend Australian to my regular publications order.

If I didn’t tell you that Tony Sarno has asked me to contribute to SYTE on a regular basis then you’d probably see my name in a few weeks and read this review differently. I’ve had nothing to do with the planning or the current issue, and didn’t even know the section’s name until the press launch. It will be interesting being inside the beast and you’re sure to read about it. As always, these comments are my own. FH.

SYTE stopped being a magazine style section in the paper in ?