Update: They have all been sold to an English collector. He promises to love them.

It’s time to get rid of the robots. All of them.

Why? Well I no longer have a country shed to store the six tea chests full of them. That’s because I’ve moved to a small city apartment that I can’t display them in, and if you don’t see them to enjoy them, paying for storage seems silly. I’m never going to move to a (much) bigger apartment.

I started collecting when the first Star Wars movie in 1977, with it’s sophisticated R2D2 and C3PO dealt a death ray blow to those men in cardboard robot suits. Those had been my introduction to B Movie science fiction. A lot o0f other robots joined the collection that I thought were fun, and many were given as presents ‘since you collect robots’. When I started to collect those toys, I was sure that they would disappear and (he laughs, gloating) I’d have them ALL and they’d be really valuable; and I’d be rich! Except they didn’t and I’m not.

I always thought that I would one day pass on my collection to my daughter. A tin toy inheritance, but she has no room to store them either, and doesn’t feel the same affection so it’s now my problem to find them a good home. I’m putting them up on eBay and maybe I’ll get some money back for the cost of moving them from Melbourne to Sydney to Canberra to Melbourne as I moved. Like all collectors, I figured the longer I kept them, the more valuable they’d be. Which if you’re a cheap toy made of plastic or shiny tin 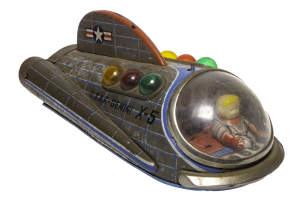 isn’t always the case, especially if you’re wrapped in paper in a wooden box in an shed that goes from -10 deg.C in winter to very hot in summer.

Some of them have laughed off the possum piss, some of them haven’t survived that well. Like this one. It was shiny silver when it went into storage, and rusty now. Sure they look nostalgic and ‘older’ but collectors don’t want that, so this is a special kind of sale. The prices I’d see on the auction sites sometimes surprised and pleased me for what I thought were similar quality to mine, but the highest prices where always ‘in box, minor signs of wear, good working condition etc.’

Ahh, that box. That was one thing I thought I’d been clever about. To save room and keep the quality high, I stored the tops of the boxes separately. I carefully removed the staples if they had them and threw away the plain cardboard bottoms. Now the collectors tell me that was a bad idea. They want a box and I (as can they) could have them made for about ten dollars or so each, but there’s quite a few which reduces the value if reselling. And they said, if I’d kept the original staples… but I wasn’t a staple collector.

‘GOOD WORKING CONDITION’. Some of these are in boxes and were unopened and hadn’t been played with by small girls (or big boys). Even those sometimes didn’t want to work until I cleaned contacts, jiggled legs, and spoke encouragingly to. All the ones I’ve persisted with (even opening backs that were easy to i.e. used screws) have been brought back to life. I’ve avoided the metal ones with tabs that fold, figuring a younger, steadier hand than mine was require or I’d just bust them off. So I feel that someone who purchased them could be sure that most of them will work with some fiddling. I started to film them so potential buyers could see what did or didn’t work (see the YouTube video below). That’s too time consuming I reckoned, I have other things to do with my days and nights while I’m getting older. I’m happier to take a lower price because the buyer takes the risk. There’s no returns on these.

I did catalogue them, photographing each front and back and the box lid if I had them.  This meant dragging a box at a time to the apartment and setting up a small folding light table.

That was so I could create a list of what I had and give some idea what condition they were in (very dusty mostly, as you’ll see in the photographs). I’ve made up some PDF proof sheets that could give you some idea of condition of each when you zoom in, and for serious intending purchasers I can give you a link to the larger  images in my Dropbox. That might help you for resale promotion.

I listed each of the items in the boxes and started to add prices I could find of comparable ones on the online auction sites. I quickly reached $3000 US, by being conservative as to what matching quality I had, for those that I knew worked. There are also many bits, spare parts, some that are not matched yet.  After talking with a dealer, I’m guessing there’s value there for a re-seller of at least $6000 AU. So I’m listing on eBay for $4,000 AU (that’s about US$2700). I don’t want the pain of selling individually, having to pack and post, so it’s a ‘garage lot’ and sold as is. We’ll have to work out the best way to ship six tea-chest size cardboard cartons, I’m suggesting it will be too hard to do overseas shipping. If it’s an east coast or SA buyer, I’ll happily put them in a van and deliver them to you. (The Great Australian Robot Collection Delivery Tour sounds like fun.)

Here are two PDF documents, the first has most of the A-grade ones, the second has some good but more market stall stuff and all the flat pack boxes . 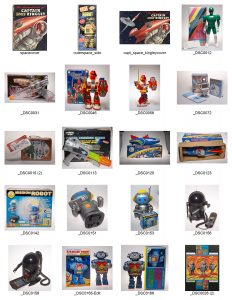 See The Lists below for their names and what I’ve found as indicative current prices prices. You can work out what prices you know or think they could resell for, and that might affect your eBay bids. There’s no Gang of Four type rarities, but some that are hard to find online, and a couple of unique ones.

ATOMIC ROCKET X-1800 motor, lights and noise works, has crack in cockpit glass, no 'radar' but maybe it's elsewhere (I hate that replica one available on eBay). The on/off lever isn't 'positive' but there's a point where it turns on. Aging litho work.  380g  No box. $60

ZEROIDS  Treads have all come apart at seam. Should glue together again Except for one Zerak and one Zobor.
Zintar  gave a kick, 2x Zerak (two boxes) one with treads,motor spins, stops/jams reverse, probably only needs lubricant.
Group of 3 with one duplicate and display boxed Zerak      Four weigh 550g

TALKING DALEK - PALITOY - ENGLAND BBC Dr Who toy has a friction drive and a battery operated talking mechanism. Pressing the button on the head selects one of a series of recordings on a plastic record. Phrases include "WHAT ARE YOUR ORDERS?", "EXTERMINATE", "ATTACK! ATTACK! ATTACK!" and "YOU WILL OBEY". Introduced in 1973. This is a mechanical mechanism with record, diaphragm and stylus. (The Dalek came in three colour combinations, silver with blue spots, red with black spots and mine is silver with black spots. )7"  Good Box. $70

HIGH-WHEEL ROBOT, 6 GEAR VERSION - YOSHIYA - JAPAN  Yoshiya made this robot in the late 50’s to early 60’s in Japan. 10″ tall tin with plastic hands, chest plate, and gears. The clockwork motor works and the paint is in good condition with minor rust. Original key.   Left foot bent at rear tin, so walks backward, in place. no top left drive gear in front panel. No spark. No box.  $60  weigh 300g

SATURN ROBOT - KAMCO - HONG KONG 13 inch plastic battery op robot. Walks with TV screen in the chest showing a space scene. Lighted eyes. Decal detailing on an angled panel below the chest- mine has been glued on upside down to box examples. 1980s. The most common version is black. Works, struggles at different points of the cycle, seems like batteries dislodge as it walks. 600g  No Box. $50

SPACE SAUCER PB-70 Toei San Ku Kaï Made in Japan  Measures about 4 1/2" in diameter includes Tonto Astronaut (with one broken hand) Push the button on side and capsule opens up shows Tonto robot.   $50 with two rockets