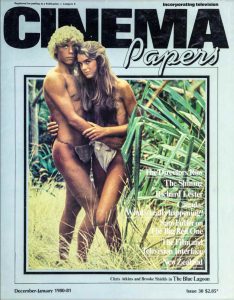 The first article I wrote for Cinema Papers was for the November 1980 issue.  I knew Scott Murray and Peter Beilby, then the editors  (editor/co-founder Phillipe Moira left them to it in 1979) Scott as filmmaker and both by reputations.  We ended up working together in various ways for over twenty years. The last issue I contributed to was February 1997. If you were a filmmaker or part of the industry,  you always bought the magazine when it came out.  There are Australian film people who have grown up never knowing Cinema Papers which is now relegated to the libraries as a resource for film historians. The bits of it that recorded my education and formed my thinking will be linked here  on whileiremeber.it and include the original versions if I think it’s of interest. Many of the interviews are available in an expanded form with original notes, and some with the cassette audio complete with my ‘er’and ‘ums’.

Arthur and Corinne Cantrill, Losing the light.
An expanded review of their two screen presentation at La Mama called PROJECTED LIGHT. Drawing on their grand 1888 home in Moonee Ponds. We joked about why it was so well attended for the week, and how no-one left being because of the current obsession with real estate.

Baz Luhrman’s William Shakespeare’s Romeo and Juliet was shot in Mexico, cut in Los Angeles and neg cut in San Francisco. This is how Melbourne’s Complete Post facility managed to snatch the bulk of the film’s digital visual effects away from the U.S. companies. This is a story that Chris Schwarze Managing Director of Complete Post and Peter Webb, their Visual Effects Designer, enjoyed telling.

How do you get fantastic background scenes behind your studio actors? Digitally of course? but before then, in an analogue film world? This was one of the ways you could do it. An Interview with David Samuelson who photographed Charles and Di’s wedding. 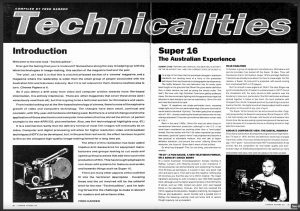 For balance I should say that the section had lots of contributors, and while I was editor, it wasn’t always written by me. Old friend Dominic Case, then at Colorfilm in Sydney, now teaching at UTS  (?) contributed a lot of technical film stuff that formed a section of the magazine that is now an invaluable resource for film history. Like this from January 1992 issue on the rise of Super 16.  Dominic described himself as “a founding member of the Super Sixteen Sceptics Society”. We had no such doubts, we all thought it was the solution to low budget feature filmmaking in Australia. 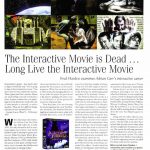 In the April 1997 issue I talked with Adrian Carr about an interactive project he worked on for independent game developer Chris Jones. Jones had lead acted and directed his previous CD-ROM game Under a Killing Moon and been panned by critics for the live action scenes. He asked Carr to direct the live action for the sequel game, and it tells a story of a digital media shift. Interesting in a time now when Youtube are on flirting with the concept of interactive movies.  But not in 256 colours at 10 frames a second! 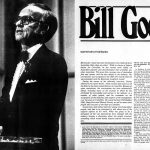 In 1986, I was lucky enough to interview the now legendary Colorfilm laboratory feature film liaison Bill Gooley. Bill died of cancer later that year and I guess we both knew that the interview was being conducted within a black border. He was frail and we enjoyed each other’s company and talked until he was very tired. One of the statements that to Scott Murray seemed too emotion-laden to print at the time was about how Bill sometimes cried over his love for the physical nature of film – the laboratory smells as the film came from the drier, and even the way that it burnt your hands when winding the reels fast. I identified with that.
The interview has lots of images so it’s in PDF format here.

A short history of a long association

Cinema Papers began publication in January 1974 and the last issue was March 2001. There is an invaluable archive of all the issues up on the University of Wollongong website. This material is made available for the purposes of research and study. Commercial use is prohibited. Issues digitised from original copies in the collection of Ray Edmondson, OAM. (Ray died in 2017, I think we only met a few times.).

In 1980 the bi-annual photographic expo Photokina* was held in Cologne in Germany. I took leave from my job at John Clemenger Advertising and along with my partner Annette, did the Grand Tour of Europe.

I had applied for a Press Pass for Photokina and in exchange promised Scott Murray that I’d produce a report of the latest tools and technology for Cinema Papers.  After three days at the event, we moved on to the picturesque medieval town of Rothenberg. I stayed in my room writing,  listening to fighter planes from the nearby the US Air base do low level practice runs up the valley. The sonic booms rattled windows and I had to check to see that WWIII hadn’t started – traveller’s paranoia.  A week later, with breaks for cheap schweinshaxe and long skinny glasses of slippery local Kölsch beer, I sent it off air-mail, a heavy, fat manilla envelope with twenty notebook pages of hand written notes, press releases,  brochures and catalogue pages marked up for publication. This was typed up at CP (allow me that abbreviation because it was what we used at the time), and a typewritten version was mailed back to a Poste Restante in Paris (?) for corrections.

My report appeared in the November 1980 issue beating American Cinematographer, and Popular Photography to the news stands. By the time I returned to Melbourne, the report had been so well received, especially by the magazine’s advertisers, I was asked if I could do a new section for the magazine titled New Products and Processes. “Just more like that” was the brief. It became Technicalities, and I only ever got paid for it when they had money ( grant time) and then only a token. It didn’t hurt my reputation with the industry as an agency producer who knew what he was talking about, and I did have other writing jobs like for Video Age as an equipment reviewer.

These articles I’m adding here are the more significant ones and I’ll introduce them with some context and reasons why.

Photokina was the ‘photography industry’ trade show but that’s where the advances in film, optics, stills and movie cameras were always seen first. It’s not like that in a digital world anymore. There’s a quirky Popular Photography magazine history of Photokina by Roger Hicks that gives an idea of how overwhelming it was to cover.
*Photokina
Close