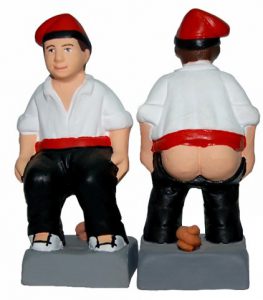 If you visit Barcelona you’ll quickly learn about Catalonia. You will be told that they are not part of Spain, they are Catalan first, then only Spanish by shared government and that the haven’t forgotten the war!

That’s the Spanish Civil War 1936 to 1939, the socialist/anarchists republic of Catalonia against nationalist/fascists. The subsequent suppression of the Catalans and their language and culture is still a raw wound. The recent vote to declare their independence from Spain is part of that.

The Catalan tradition of the ‘shitting shepherd’ – maybe not a peasant figure, just anyone in the traditional costume, the baretta cap, red sash is a 17-18th Century tradition (according to Wikipedia) but there’s a long going anarchism in hiding it in a Christmas Nativity scene for the delight of the kids.

The tradition of the Tió de Nadal, or ‘shit-log’ is probably closer to primal agricultural basic traditions but it’s just as mischievous as a shitting ‘Papa’ pope in a modern day world.