A change of state
From physical to digital images

In 1986, I heard that the legendary Colorfilm laboratory liaison Bill Gooley was dying of cancer. I knew had to interview him, and rang him to see if he’d like to talk for the Cinema Papers Technicalities section. He loved the idea and so I visited him and his wife Rosemary in their (Manly?) apartment. We knew the interview was being conducted within a black border. He was pale, frail but we enjoyed each other’s company and I was knowledgeable enough to hold up my end as the interviewer. We talked until the light fell outside, and he was very tired. It’s a long tape that I transcribed and we had to leave things out. One of the statements that to Scott Murray seemed too emotion-laden to print at the time, was about how Bill, with tears in his eyes, said he sometimes cried over his love for the physical nature of film. The laboratory smells as the film came from the drier, and even the way that it burnt your hands when winding the reels.

(I identified with that. Rewinding reels in the projection box for my father, you had to just lightly align the edges and if you get too enthusiastic and try to slow it, and not snap it, it really does burn long marks into your fingers.) Bill’s point was there is a presence, a solidity to the image format. I’m sure he would have adapted to the shift to completely digital finishing but he never had to.  Only six years later I wrote this…

“That physical quality of the film image now seems to be heading for a collision of a more ephemeral, digital one, and it may be that the clapper-loaders and the laboratory technicians (and maybe the telecine operator) will be the only people who will touch the film as an object – at least until the theatre projectionist joins the reels of release print onto the continuous platen for screening.”

“There will be some losses, things we will have to accept, because it appears that it will be faster and more cost-efficient to use the various methods of video and digital editing and neg matching than handling work­ print. And in this world where time and money are king, one of our tasks as technical journalists is to make sure that the king is really putting on a grand new suit of clothes and won’t be left standing naked in the parade.”* 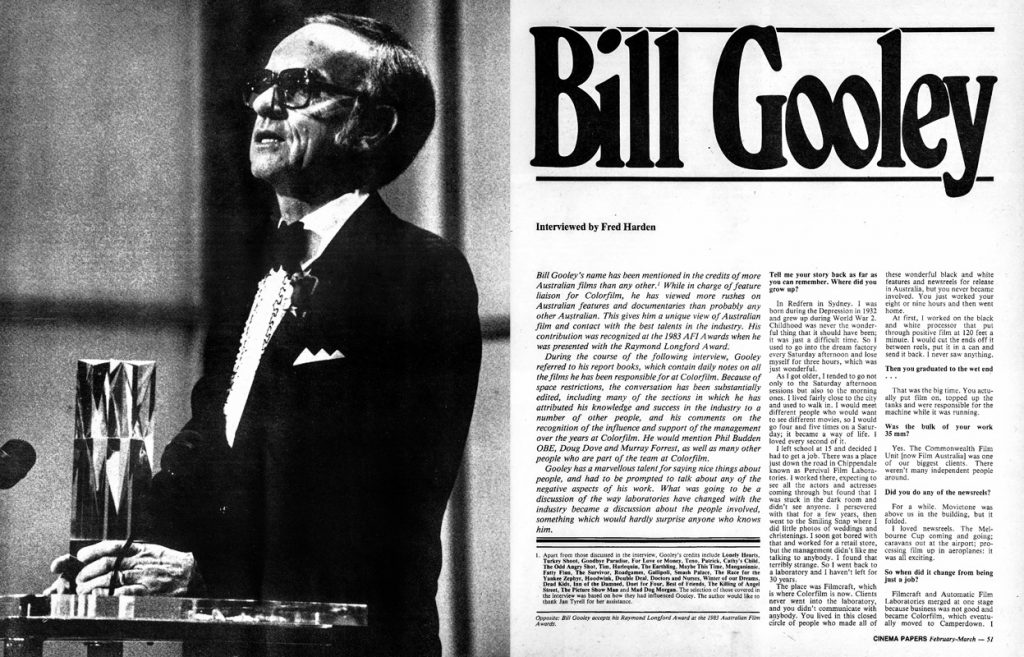 There are a lot of images in this story, so I’ve left it as a seven page PDF you can download here.

(*That was in Cinema Papers #88 May-June 1992. Neg matching negative to a digital edit went out first. Now, it’s a DCP that gets loaded to the video projector’s hard drive in the cinemas, none of that messy film print stuff.)