The zen of the long drive.
From Another Country Diary 3 Feb. 2002 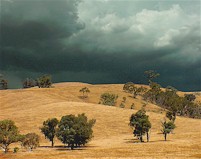 Living (and travelling) between cities and the country has been a consistent part of my life from the time, when as a teenager, I moved from the country to Melbourne to go to RMIT. It was hard to get back there until I bought my first car when I was 20. Since then, I have been heading either from the city to the country or from Sydney to Melbourne following work. I’m used to it and I like it. Travelling  alone on a long drive has a complexity that always gives me something new and it’s not the same things that you get from ‘travel’.

As a Traveller or Tourist, you’re looking for new experiences and sensations from your journey and the destinations you visit. While that can happen in a car, most of these trips were just about getting from A to B and could have been by air or train (if you didn’t also need the car when you arrived. And if you could afford it.) I’ve been driving from Melbourne to Sydney at least  four or five times a year for thirty years or so. When I started that trip of around 3000 kilometres it took more than a day (especially in the old cars I used to own), requiring an overnight stop or roadside sleep. Now it can be driven in 10 hours in relative comfort. From Bungendore it takes about 7 hours to get to Melbourne and 3 to Sydney.

First you get the thinking time. There are still gaps in the journey where the car radio doesn’t work, and if there’s no cassette music I feel like listening to in the small dark green, cardboard kid’s suitcase I use to store the tapes, then it’s silence. That is quality think time. It’s partly why I overcome my guilt about travelling alone in my ‘environment antagonistic petrol burning car’ and avoid picking up hitchhikers, even when they look benign and friendly.

This is my space and I enjoy the quiet and the freedom of things being at my rhythm.

The other aspect involves the urge to record some of that now very familiar scenery (with an occasional fresh moment as a new bit of dual highway is opened and the vista is pushed sideways) and the strange doggedness of getting to the destination. It becomes an intellectual tussle. “Wow, look at the light on that hill. I have to photograph it. I’ll just pull over. Hmm, double lines, where is it safe? Damn, can’t slow down now, there’s a truck behind. I’ll just signal and then try and find a spot. Oh, now it’s not as nice, it was better with those trees framing the edge. I’ll go back. Damn, the highway is divided so I’ll have to find somewhere to turn around. God that was beautiful, just the perfect angle! Go on truck, pass me so I can stop. I can’t see anywhere ahead. Oh, it’s too much trouble, there’ll be another good shot ahead”, and you speed up again, and there isn’t an angle as nice or you flash past another “Wow” moment and the same equivocating process starts again.

It’s like that quote I like from the  Seamus Heaney poem Postscript where he writes about driving through County Clare  “when the wind and the light are working off each other”.

Useless to think you’ll park and capture it
More thoroughly. You are neither here nor there,
A hurry through which known and strange things pass
As big soft buffetings come at the car sideways
And find the heart unlatched and blow it open.

This time, just out of Gundagai I did stop. Not at the first wow moment but before the fast moving light had changed. Just before the clouds swept a heavy summer thunderstorm over the road and everyone slowed or pulled over as the highway was inches deep in water. Five minutes later it was gone, leaving only that intoxicating smell of rain on summer dry ground and dry grass that came through the air conditioner. It prompted me to open the windows which filled the car with a rush of hot wet ion charged air.

Memo to self: Don’t just avoid the dilemma by trying to photograph out the window with one hand while you’re traveling at 110k (sort of). Even if the clouds are spectacular and the light patterns weird. Just watch the road or you’ll die.