The internet killed the radio star
It’s better to burn out then it is to ossify/stiffen/petrify/accrust. 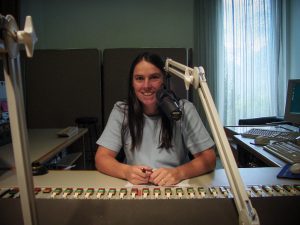 For six years I had a weekly segment on ABC Radio 666 in Canberra talking about computers and the Internet with a morning, then later, an afternoon show presenter. I’ll add some of that air-check and pre-recorded audio here, but this was the last email when I signed off.  It was a lot of hard work to research and prepare the segment and my day job at Grey Interactive was becoming more demanding. (My biggest beef at the time was that they wouldn’t mention my web business at Grey, who were donating my time, while they were happy to credit authors and publishers.) They didn’t want me to go, saying I’d regret not being a big radio fish in a small pond (they did run some of the bits nationally as ‘filler’) and they’d been authorised to actually pay me $50 a segment, something unheard of with the freebie world of ABC radio.  ‘See ya’ I said. Nicely.

Louise we can expand or drop any of these as you see fit. It’s a bit waffly written down…

I started on 666 when Leanne Scott used our early sessions to learn about the Internet, I think the first were in 1998 (How long is that in internet time? Or Dog years?)
Connection speeds where all 56k, and you had to consider 28k in some places, our office had a screamingly fast ISDN line of 128k.
We had to explain what Flash was, and how to use Real and Microsoft Media player.
We didn’t mention spam until 4 years later, now it seems like it was always there.
We introduced listeners to blogs and talked about some good ones over the years, now they can do it with their mobile phones (www.textamerica.com)

Top 5 sites that we mentioned?

Reading URLs on radio is always fun. We only started to add the sites to the ABC Canberra website in 2002, people had to ring in. It’s interesting that most of those sites still exist and the links are ok. Good choices or luck?

Sites that are sensitive? Eg Airtoons which makes up clever and rude captions to those comic strip emergency cards in airplanes. September 11 saw that one squashed for a year. We couldn’t mention it.

Radio with pictures? I did a session on Robot sites in March last year and brought in a toy one from my collection, I bounced it around the microphone and we put it up on the site and I had someone offer (a lot of money) to buy it.

Fame is fleeting. Only twice has someone recognised my voice or name from radio. A friend who said I appeared in his nightmare, then woke up to hear my voice on his clock radio.
And a man at a ceramic tile shop who said he enjoyed the pieces I did with that nice Louise Maher so he gave me a discount.

The two best Web newsletters to subscribe to while I’m away.
Marylaine Block, a librarian, “Neat New Stuff I found on the web this week” (now gone but archived here)
Tara Calishain. ResearchBuzz  She’s more of a techy (she’s written a book called ‘Google Hacks’) but has a wide intelligent interest in sources of information online.

Oh, and you can check out but you can never leave.
The ABC website has lots of our hidden pages that even the ABC doesn’t know about. (I was trying to find a start date for our talks.)
Use the ABC site’s Panoptic search in advanced mode, try ‘refine this query’ and gives you a full Roget’s Thesaurus entry ; harden, stiffen, indurate, petrify, temper, ossify, vitrify; accrust. (Panoptic Search? Forget it in 2018)

It’s better to burn out then it is to ossify/stiffen/petrify/accrust I reckon.
See you all on the web.

Nostradamus 2.27 sec (they are all about the same length)