Jackdaws
In praise of taccola

When I asked the waiter what the birds were, circling above the old walls over our balcony table view in Spello, he shrugged, rolled his eyes and said he didn’t know, “Even what they are called in Italian?” I asked disbelieving. Nope. Now I’ve found they’re ‘Western’ jackdaws, Google says in Italian they’re ‘taccola’. If you decide to call them rooks, it is ‘corvi’, (crows are ‘corvo’). 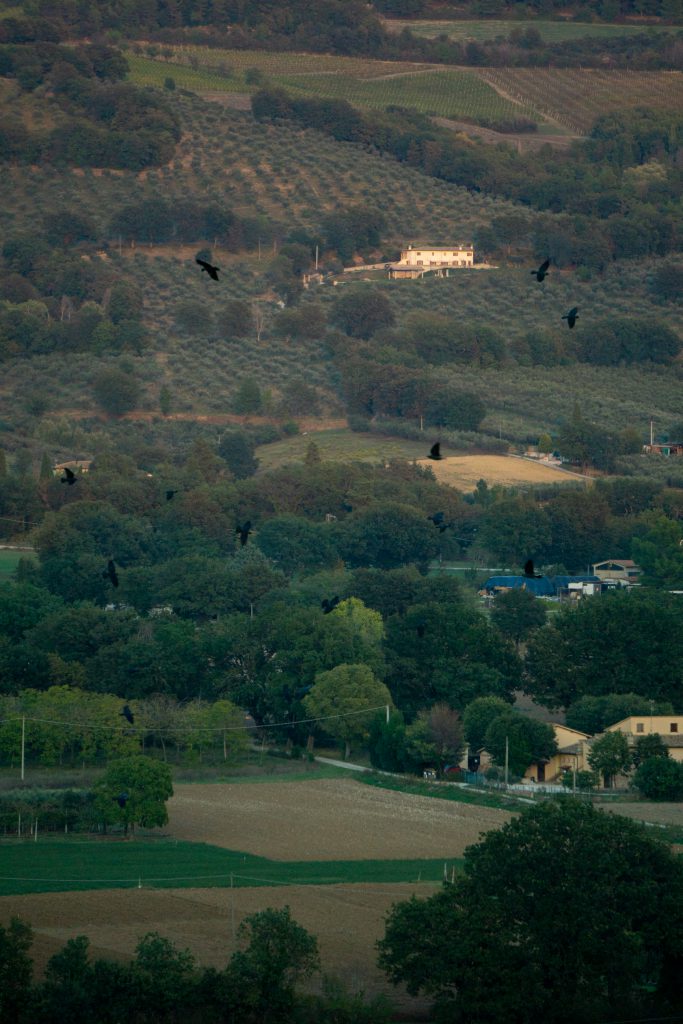 Officially they’re the Eurasian Jackdaw (Corvus monedula), they look like small, Australian ‘crows’ (our ravens), mostly black with dark grey markings, but the sound when they circle is unique, a ‘tchak’ and whistle. Investigating and being aware of them as we travelled in Italy, I think they’re now one of my favourite ‘exotic’ birds and a tribute is in order. The Western Jackdaw entry on Wikipedia is very thorough and I encourage you to read it if you’re interested. It helped me understand the bird as I travelled, and particularly the derivation of the name.  I’ve selected some bits below.Not being from Europe, the folklore and stories are particularly attractive.  I knew some of them but the thieving jackdaw sits with tales of the magpie (another favoured bird I wrote about here). Intelligent, they can be trained to imitate human speech.  Males and females pair-bond for life and pairs stay together within flocks. Like magpies, they are known to show interest in shiny objects such as jewellery. John Gay, in his Beggar’s Opera, notes that “A covetous fellow, like a jackdaw, steals what he was never made to enjoy, for the sake of hiding it”.

“Nestlings begin making a soft cheep at about a week of age. As they grow, their voice becomes louder until their call is a penetrating screech around day 18. After this, the voice deepens and softens. From day 25, the young cease calling and become silent if they hear an unfamiliar noise.”  Thank goodness.

“In his book King Solomon’s Ring, Konrad Lorenz described and analysed the complex social interactions in a western jackdaw flock that lived around his house in Altenberg, Austria. He ringed them for identification and caged them in the winter to prevent their annual migration. “

“Western jackdaws usually breed in colonies with pairs collaborating to find a nest site, which they then defend from other pairs and predators during most of the year. They nest in cavities in trees or cliffs, in ruined or occupied buildings and in chimneys, the common feature being a sheltered site for the nest. The availability of suitable sites influences their presence in a locale. They may also use church steeples for nesting, a fact reported in verse by 18th century English poet William Cowper:

A great frequenter of the church,
Where, bishoplike, he finds a perch,
And dormitory too.

Nest platforms can attain a great size. A mated pair usually constructs a nest by improving a crevice by dropping sticks into it; it is then built on top of the platform formed.[62] This behaviour has led to the blocking of chimneys and even resulted in nests crashing down into fireplaces, sometimes with birds still on them.”

“The western jackdaw has been hunted as vermin, though not as heavily culled as other species of corvid. After a series of poor harvests in the early 1500s, Henry VIII introduced a Vermin Act in 1532 “ordeyned to dystroye Choughes (i.e. jackdaws), Crowes and Rokes” to protect grain crops from their predations. Western jackdaws were notorious as they also favoured fruit, especially cherries. This act was taken up in a piecemeal fashion, but Elizabeth I passed the Act for the Preservation of Grayne in 1566 that was taken up with more vigour. The species was hunted for its threat to grain crops and for propensity for nesting in belfries until the mid-20th century.

German naturalist Alfred Brehm considered the western jackdaw to be a lovable bird, and did not describe any negative impacts of this species on agriculture.

“The western jackdaw is one of a very small number of birds that it is legal to use as a decoy or to trap in a cage in the United Kingdom. … Permission to shoot western jackdaws in spring and summer exists in Cyprus as they are thought (incorrectly) to prey on gamebirds.”

“An ancient Greek and Roman adage runs “The swans will sing when the jackdaws are silent”, meaning that educated or wise people will speak only after the foolish have become quiet. In Ancient Greek folklore, a jackdaw can be caught with a dish of oil. A narcissistic creature, it falls in while looking at its own reflection.

The Roman poet Ovid described jackdaws as harbingers of rain in his poetic work Amores. Pliny notes how the Thessalians, Illyrians, and Lemnians cherished jackdaws for destroying grasshoppers’ eggs. The Veneti are fabled to have bribed the jackdaws to spare their crops.

In some cultures, a jackdaw on the roof is said to predict a new arrival; alternatively, a jackdaw settling on the roof of a house or flying down a chimney is an omen of death, and coming across one is considered a bad omen. A jackdaw standing on the vanes of a cathedral tower is said to foretell rain. The 12th-century historian William of Malmesbury records the story of a woman who, upon hearing a jackdaw chattering “more loudly than usual,” grew pale and became fearful of suffering a “dreadful calamity”, and that “while yet speaking, the messenger of her misfortunes arrived”. Czech superstition formerly held that if jackdaws are seen quarrelling, war will follow, and that jackdaws will not build nests at Sázava after being banished by Saint Procopius.

The jackdaw was considered sacred in Welsh folklore as it nested in church steeples – it was shunned by the Devil because of its choice of residence. Nineteenth century belief in the Fens held that seeing a jackdaw on the way to a wedding was a good omen for a bride.

The jackdaw is featured on the Ukrainian town of Halych’s ancient coat of arms, the town’s name allegedly being derived from the East Slavic word for the bird. In The Book of Laughter and Forgetting (1979), Milan Kundera notes that Franz Kafka’s father Hermann had a sign in front of his shop with a jackdaw painted next to his name, since “kavka” means jackdaw in Czech.

I’ve more video than stills of the birds from this trip, but if I get back to the UK or Europe, my eyes will be a little more tuned. 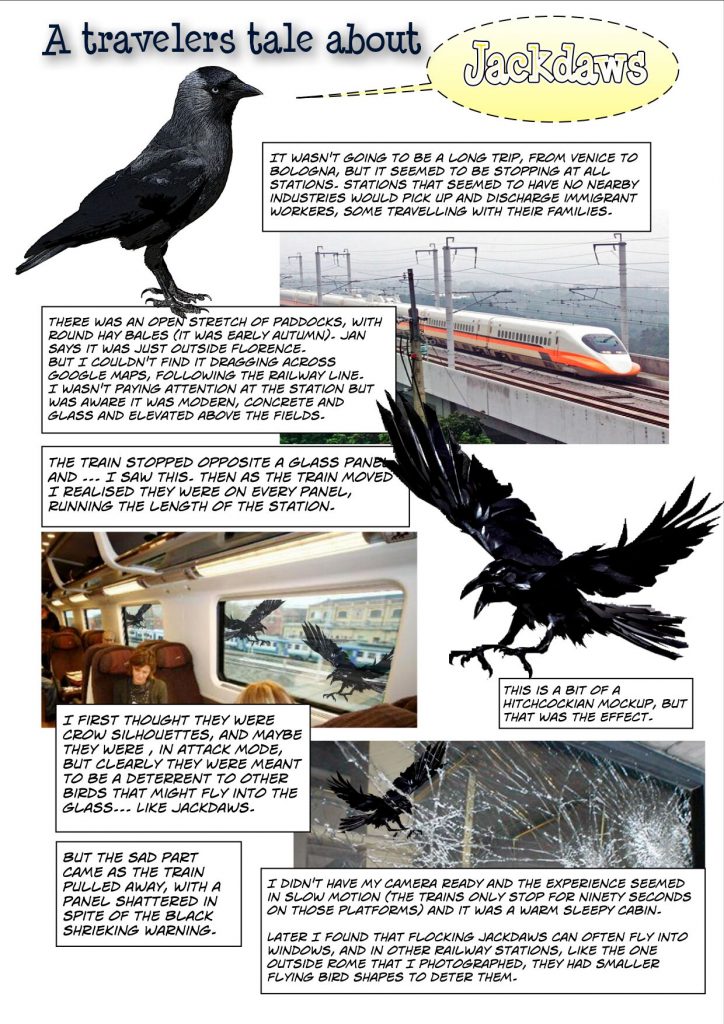