This is one of the more famous autopsies carried out by Woods, he used X-rays to find a bullet lodged in the victim’s brain, which was not the obvious brutal cause of the girls death. Identifying the body went on for months.

This is from Trove. Read the Truth double spread (click to see it enlarged).
This was a story that had passed into folklore when I was a kid, I remember my parents talking about it, and somehow I never look at roadway culverts the same way.

At the conclusion of the inquest today into the death of the “Pyjama Girl, “whose body was found in a culvert four miles from Albury on September 1, 1934, the Coroner, Mr. C. W. Swiney, said the evidence did not enable him to say who was responsible for her death. The Coroner praised the work of the police in their efforts to establish identification of the dead woman. Det.-Inspector Bowie announced that the Commissioner of Police, Mr. Mackay, and the Superintendent of the C.I.B.Mr. Prior, were determined that no effort should be spared in solving the crime. Medical evidence showed that the girl had been shot through the head. However, death, it was stated, was caused by a fractured skull when the victim was battered on the left side of the head and over the left eye. During the proceedings there  Detective -Sergeant McRae said he wished to indignantly refute rumors that Thomas Hunter Griffiths had any as sociation with the actual tragedy. He added that baseless rumors and Insinuations had been circulated, and he wished to state publicly that they were entirely without foundation, and there had not been the slightest suspicion against Griffiths or against his parents, who were, well-known and highly-respected citizens. Tbe Coroner said he heartily agreed with Detective-Sergt McRae. Evidence of finding the body was given by Griffiths, a young grazier, of Delaware Station. Griffiths told the Coroner that on September 1, 1934 he was leading a prize bull from Albury to his fathers station on the Howlong Road. He had walked the bull on to the grass in an effort to ease the animal’s feet, and when he got abreast of a brick parapet culvert, about four miles from Albury, he saw the body of a woman in a bag at the entrance of the culvert. Her head was inside the bag and completely covered, and the bag had been badly burned.

Did Not Know Her

Witnesses said he did not interfere with the body, but tied the bull to a fence and, borrowing a bicycle from Jack Hall, rode as quickly as he could to his father’s home and telephoned the police. Witness then returned to the culvert and awaited the arrival of his father and the police. He had been shown a photo graph of the girl, but she was no person whom he knew. Constable W. H. Kelly said, in company with other police, he saw the body partly clothed in pyjamas and with a burnt potato bag over her head and shoulders. There was a strong smell of kerosene at the en trance to the culvert where the body was found, whlle he also detected some brown marks on the grass which had been caused by an oily substance Evidence given by Dr. Leslie Samuel Woods, ex-acting Government medical officer, said the feet of the woman were badly burned. She was well nourished and was between the age of 25 and 30 years.The skull was badly smashed on the left side and there were eight linear wounds on the, left temple, about an inch long. There was also a large jagged penetrating wound on the left frontal bone, above the left eye, which perforated the skull and exposed the brain. Other wounds were found on the face and head. The Injuries to the head had apparently been caused by a heavy and possibly blunt instrument, such as a motor tyre lever. There was no noticeable sign of poisoning.

Detectlve-Sergt. Thomas Walter McRae, of the Sydney C.I.B, said he had Investigated, the case with other police. Although, every possible inquiry had been carried out the identity of the dead woman had not been established. The police were unable to place any informa tion before the inquiry as to the exact time and place the deceased had met her death.   After reconstructing the crime, witness added ‘he was satisfied that the dead woman’ was placed in the potato bag in which her body was found a very short time after her death. He was firmly convinced that the dead woman had been carried some distance in a motor car or cycle sidecar before being placed at the entrance to the culvert. Portions of the bag found round the woman’s body had been taken to Melbourne, and were photographed by infra red process. The fingerprints of the dead woman were also taken and, together with photographs and description, were circulated all over the Commonwealth and New Zealand, but without result. The body of the murdered woman added witness, was still at the Sydney University, and had been seen by hundreds of persons for identification purposes. 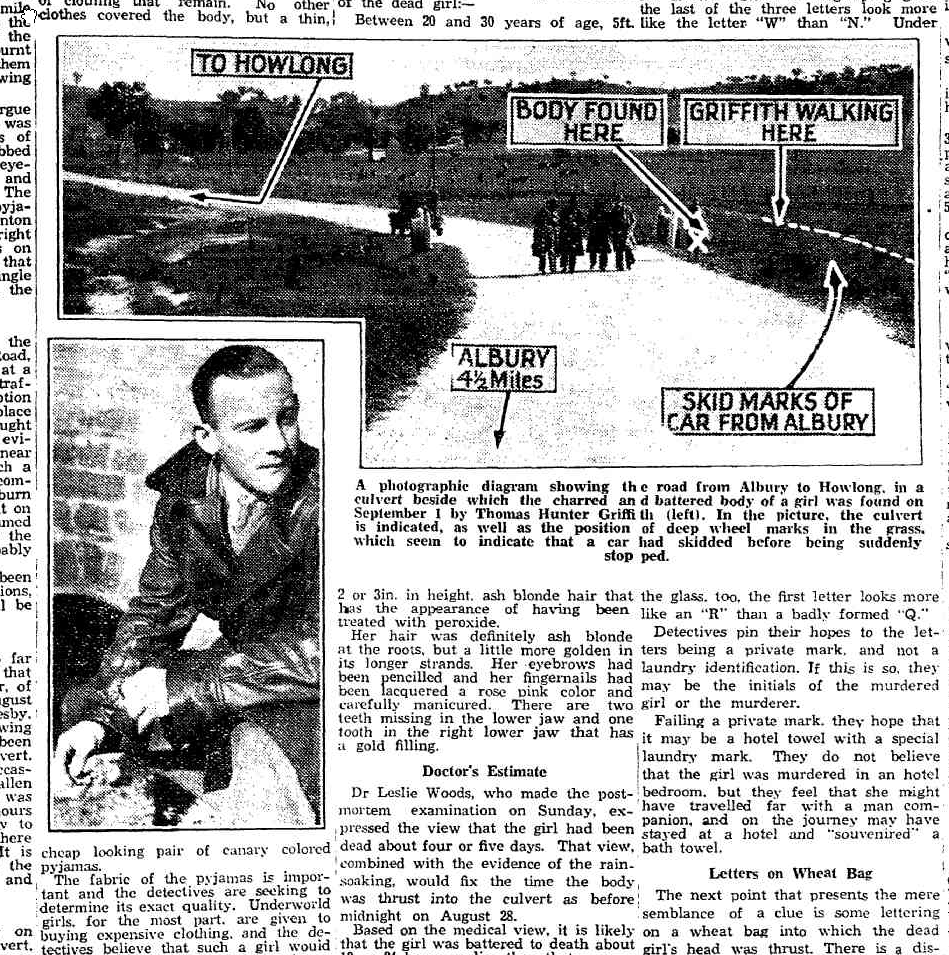 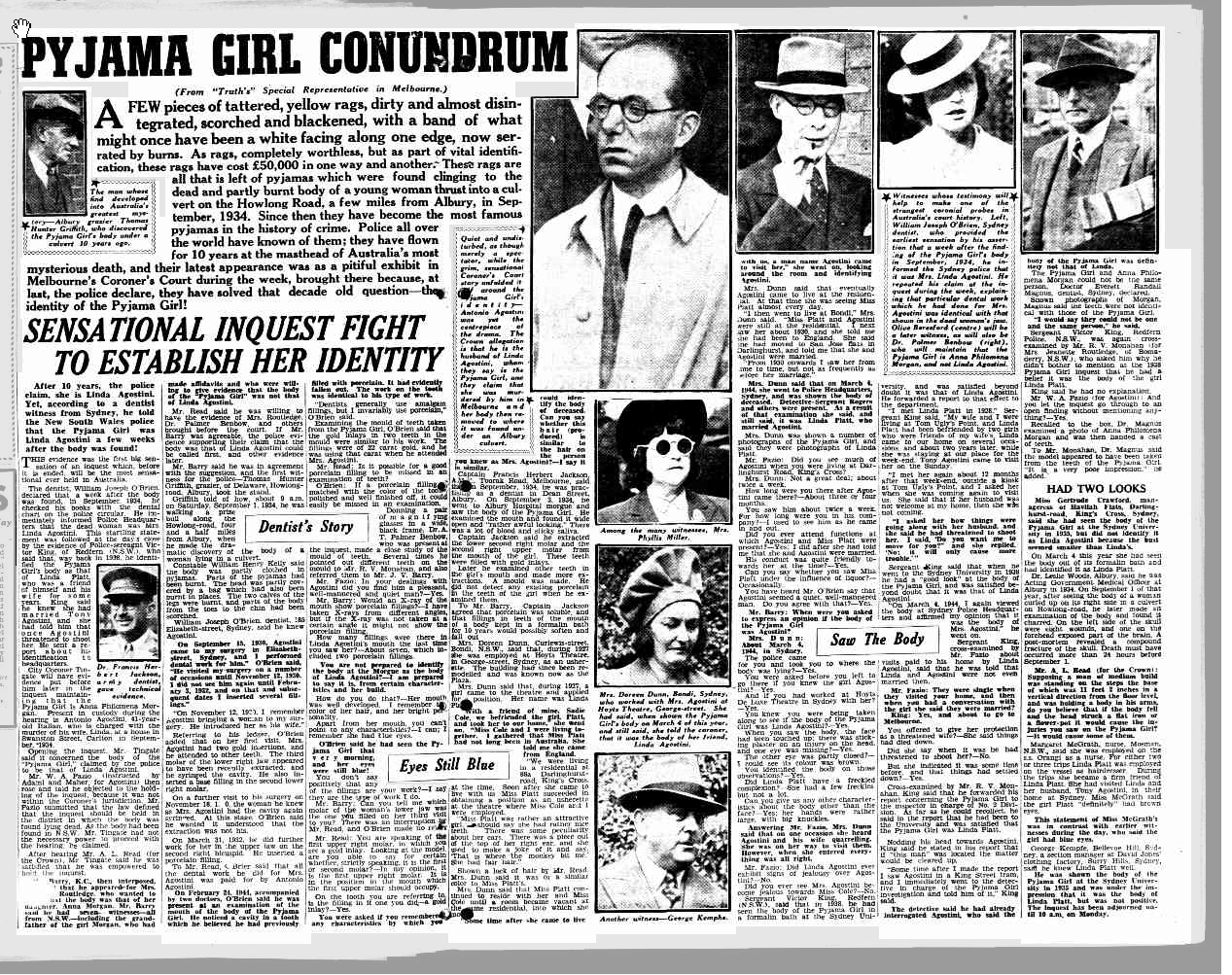 Sub Menu
Doctor Woods – Part 1.  Who are you L.S.Woods?
This is what I’ve found from archives and contributions, from the reports of general meetings of clubs and societies, obituaries, autopsies, published  fame and notoriety, and things he’d probably like to forget – like the Pyjama Girl Case.
Doctor Woods – Part 2. Albury
Looking at the town of Albury and linking its events to those that are in two films, Views around Albury and  Shots at Random  around Albury.
Doctor Woods – Part 3. Becoming a Filmmaker
His first cameras, learning the craft, titles (thank you) and then losing the rigour and becoming a home movie maker. Splices and dirty edges.
Doctor Woods – Part 4. A country doctor’s life
The family movies. The people he clearly loved, what interested him – (which at the end of his life – Merimbula with his fishing mates )