Born in 1915, after his English father returned from the war in Europe, my father, Herbert Frederick Harden moved with his older sister and mother Clara to Melbourne. They never moved from their house in Camberwell.

Dad died in 1996 – just a few years before we could party along with Prince. He was 81. He died pretty much ‘legally blind’ but it didn’t stop him ‘seeing’ things.

This text is adapted from the Centenary Peoplescape website.

As a young twenty year old, Fred Harden (he never used his first name Herbert, hating the abbreviation ‘Bert’) gave up the idea of being a farmer when a  travelling picture show came through Gippsland where he was working (unhappily) on a dairy farm.  The picture show manager noticed his mechanical ability when he helped fix a problem generator. They asked if he’d like to work as an assistant projectionist, so for the next few years he went with the travelling ‘pitchers’  through most of the country towns in South East Victoria.

His job was unpacking the generator and setting up the equipment each night, in the town or church halls while his boss sold the tickets. Local girls would get to be usherettes for free entry, and more than a few would eye this tall young man working in the flickering light. During WWII he enlisted as an Australian Army radio operator in New Guinea, but he still worked as one of the projectionists on the regular outdoor screenings they held amid the mud and mosquitoes. The army trained him as an electrical engineer which he continued as a profession after the war.

Returning from New Guinea (with malaria and white hair), he married a girl who was one of the  usherettes in one of those high country sawmill towns (Powelltown, Vic.), and started a family.  He was working for Nicholas -Aspro and obviously impressed as he was offered the job as head engineer ( there was just him) changing the Walwa Butter Factory from steam machinery to electric generators. Of course he soon started the local picture shows there with a friend, Alan Wilson. At first they projected from the horse stalls at the back of the Walwa Bakery, with the patrons in the open air sitting in deckchairs, breath rising in the electric light on cold nights. Then from a real bio-box he helped design when the town’s Returned Services Hall was built.

As our family grew and the Butter Factory closed, we moved to Corryong, then to Melbourne, but he was always working nights as a projectionist. In Melbourne he started as a cinema equipment installer for Hoyt’s in the expansion of the multiplexes and the first of those new fads, the Drive-In. 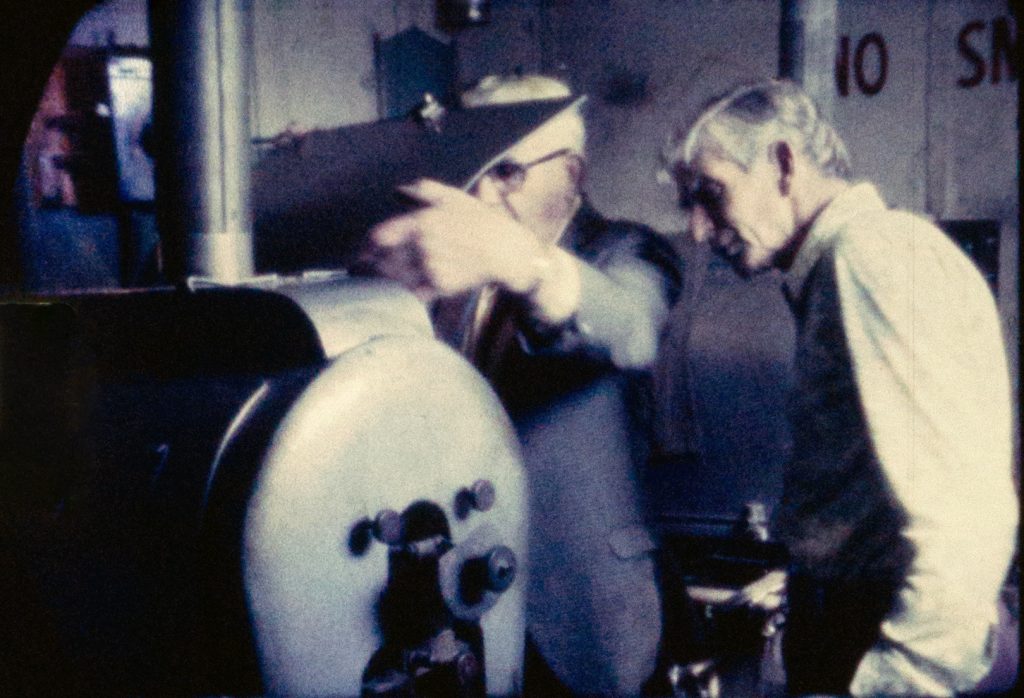 A chance meeting in a film rental exchange with his old travelling picture show boss, he was offered the the lease on his own theatre in Traralgon, the La Trobe. With my mother Betty he managed the local picture theatre there for years, becoming involved in the town, running shows three nights a week with a kids matinee on Saturday. When TV killed of the theatre trade, he wasn’t bitter, they just closed the theatre and since he’d learned how to repair TVs and moved into TV servicing.

The whole family moved back to Melbourne when I started at RMIT Photography School, they bought a house in Burwood, sold it and travelled around Australia in a campervan.  As his health and eyesight slowly failed They finally settled down near my sister in Diamond Creek outside Melbourne. He was blind for the last years of his life but I like to think there were enough images in his head from those years of movies to last him till the end.

For the Centenary Peoplescape you had to write ‘Why is this person important?’

This nomination is really the story of all those people that ran the country cinemas, from the travelling picture show men to the regular Saturday night screenings in those small halls. They gave those towns, and the people who would travel in from miles around, a glimpse of the world outside, a social focus and a dark corner to hold hands with a new girlfriend. The projectionist made it happen, he was the showman. From the opening of the curtain to the hand drawn slides of local businesses at interval. There were always the serials, the cartoons and two features. Along with the pleasure they gave to all those patrons, always striving for the best showbiz presentation, this particular picture show man passed the love of movies, and the technology behind it, to his eldest son.