Spending time with these films has brought a lot of pleasure, surprises and, as a fellow film-maker, recognition of the subtleties within the content. I’ve learned what those looks to camera mean from his subjects – “Can you go back in and do the walkout again?” There are techniques he has used until he has mastered them, his perceptive photographer’s eye, learning about the extra time it takes to ‘cover’ a story, and the tactile qualities of just handling precious ‘old film’. There are some splices that separated, sprocket holes that are tearing and sending tendrils of torn emulsion flickering into the frame, and the horror and delight of the past film jam in the projector that created bubbling frames. That is now rarely experienced by an audience and alien, unless you too have fed strips of precious glowing images into an uncaring mechanical projector. It happens on a few frames in this collection. 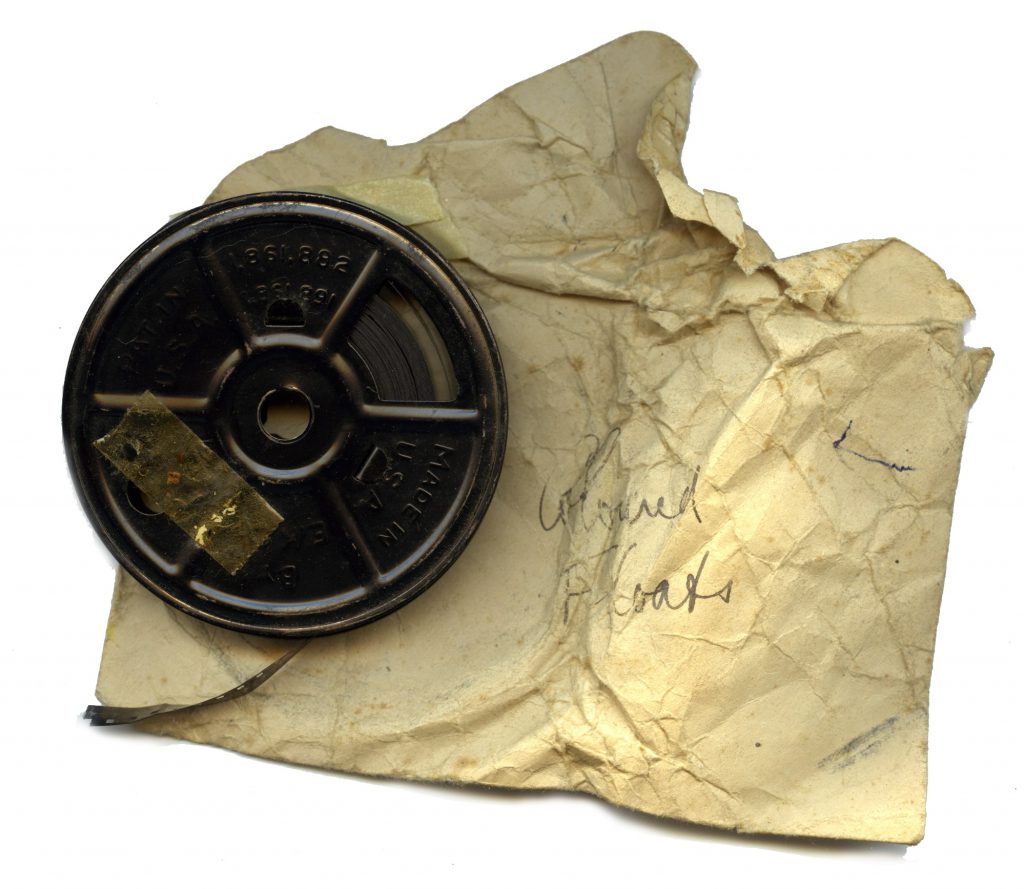 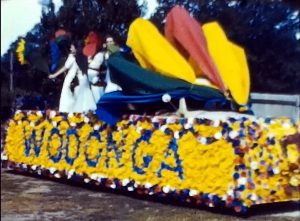 Not all these films were stored in film cans. That usually helps the film from drying out, shrinking and twisting. Some were on open reels that I put in new boxes.This short reel was in an envelope, marked as you can see ‘Coloured Floats’. It shows one of two Main Street parades in the collection, this was in 1947 with the theme of ‘Honouring the Pioneers’. Doc Woods realised that you had to be up close to the float to get detail and has taken a series as the procession moved out from the showground at the beginning of the day, with kids on bikes and spectators watching on. There are none on Dean Street like the earlier black and white event.

One of the Doctor’s later cameras looks to be the Bell & Howell, Filmo Sportster. Produced from 1939. There are other cameras seen in the films and because of the frame line differences and frame edges, I can tell he certainly used more than one. This had a hand wound spring motor, grey (some were brown) crackle enamel finish, it looks like the body is milled out of a single piece of metal. Weighing around .7 of a kilo, it would have felt solid in his hand. The viewfinder was a direct optical eyepiece with a tiny rear viewer, just a peep hole really, and you would use a flip into place mask to help frame when using ‘longer’ telephoto lenses. 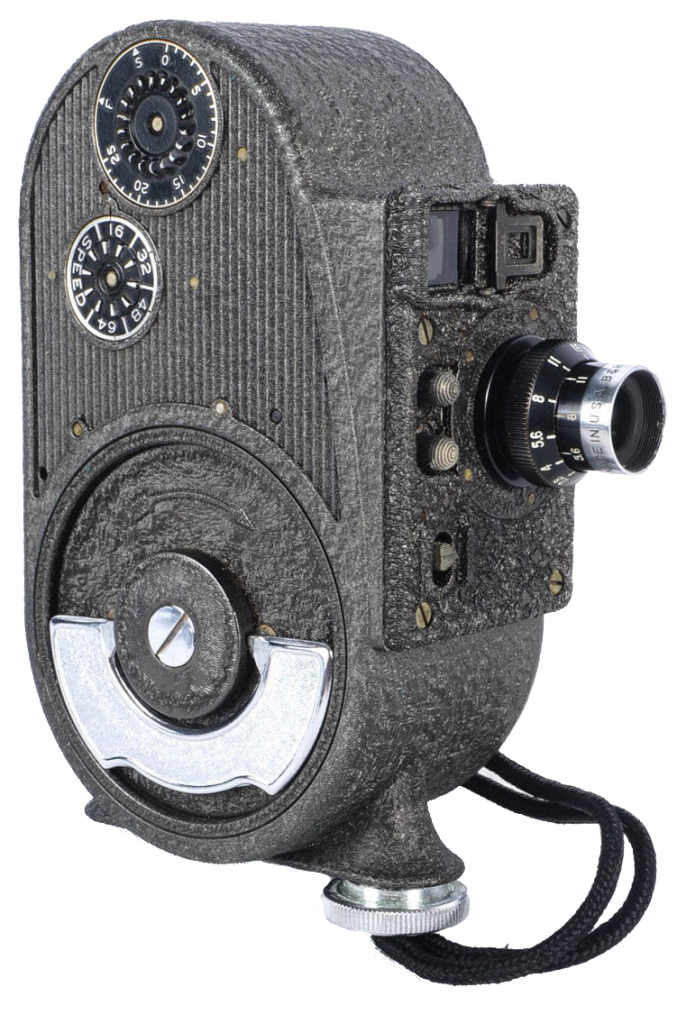 The Bell & Howell Filmo Sportster 8mm had a production run from 1939 to 1952. It was produced in large numbers and was a relatively inexpensive consumer grade movie camera (for its time). One site says ” A Bell & Howell ad from 1946 says ‘FILMO SPORTSTER – Weighs only 24 ounces – convenient to carry anywhere. Easy to load, 8mm film drops into place . Four speeds, including slow-motion, plus single picture control for animating cartoons, titles and maps. Filmocoted lens quickly interchangeable with extra speed and telephoto lenses”
From  Evan Lannen -Flickr
Advertisements in Australian publications say prices ‘starting from 20 Pounds 12/-.’ The inflation figure in Australia from 1938 £ to 2018 $ makes the price today of A$1,800, so that makes these cameras a luxury item, but something a doctor could afford. 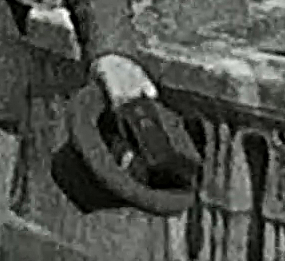 There is another camera in this shot of Doc Woods in Europe in the early reels (I’m assuming that the camera (s) was purchased for this trip, maybe even in England.

This image doesn’t look like any of the folding still cameras of the time but neither can I find a movie camera with that appearance. There’s a handle on the top that he has his fingers through.

“Dr. L. S. Woods, of Albury, has sailed for England, and after seeing the Coronation will, do a post graduate course before returning to Australia. During Dr. Woods’ absence. Dr. Goldberg, of Melbourne, will act as locum tenons.”
Albury Banner and Wodonga Express Friday 12 February 1937

Not knowing how long the post graduate course was, and it was described as being in Vienna and studying ‘eye diseases’, the  course appears to have mostly involved a travel holiday and the Rotary conference in Nice. So this may have been a way to say this is serious, not pleasure.

The first dated title on these films says ‘Vienna 1937’. Although there is a change across the European trip from excited waving around to stable camera work, the images were taken by two or more people. The ‘Off to France’ sections start with boat leaving Dover (and a train in station reminiscent of the Lumiere brothers L’Arrivée d’un train en gare de la Ciotat) it seems to come first in the collection. There is no Coronation footage which means there is a missing reel in my box, or the camera was purchased afterward – so I’m guessing these films start in May 1937. 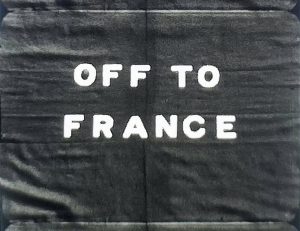 I haven’t been able to place the last colour reels in an accurate time frame.  1950s? certainly, 60’s maybe?There was less editing, fewer titles and sillier jokes. In between are a few moments where the filmmaker had time to frame, and wait for a ‘moment’ . The later images are all loose and unstructured but I’ve been happy to allow him those indulgences after 30 years. And we know what he can do, so the choice not to, seems OK for a man who has almost certainly gone blind in his right eye with melanoma cancer. It’s tempting to point to all the sun-browned bodies on the beaches and years fishing in the open as the cause, but he would have also been close to a lot of the early X-ray equipment that, taking over from his father,  he championed over the years, without shielding and radiation spilling around him.  Was that the cause? He died 28 November, 1968. He was 73 years old and his wife Rita had died in 1964. 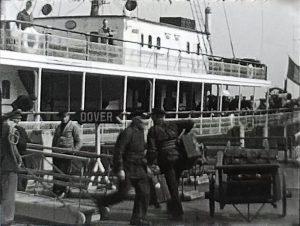 Clearly this was early on in the journey and with a clean camera. Leaving Dover for France. Even with a relative clean frame from a new camera, there are still ‘hairs in the gate’ (like at right). I can’t believe that the Doc didn’t become aware of the need to clean after each reel! Sure while travelling he wouldn’t see the problem as the films were all sent (or carried) home for processing. You wouldn’t see this of course until you projected the reels, but the later films all suffer from it. I’m assuming that the projector gate cropped most of it out. 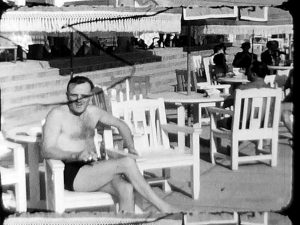 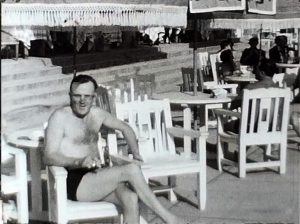 With Standard 8 mm, you turn the 25 ft 16mm wide reel over when exposed down one side, and expose the other edge. So if you  change a reel outside in a dusty environment you get a lot more dirt.  I’m sure some of the later dirt is pipe tobacco, given the ‘woody’ look of it.
It is hard but not impossible to retouch frame by frame at this low resolution. A task ahead for me when the film is scanned at high resolution.(This was the liberation of the sealed 50 foot cartridge of Super 8 . It had a bigger camera gate, but you still had to avoid dust and clean it!) 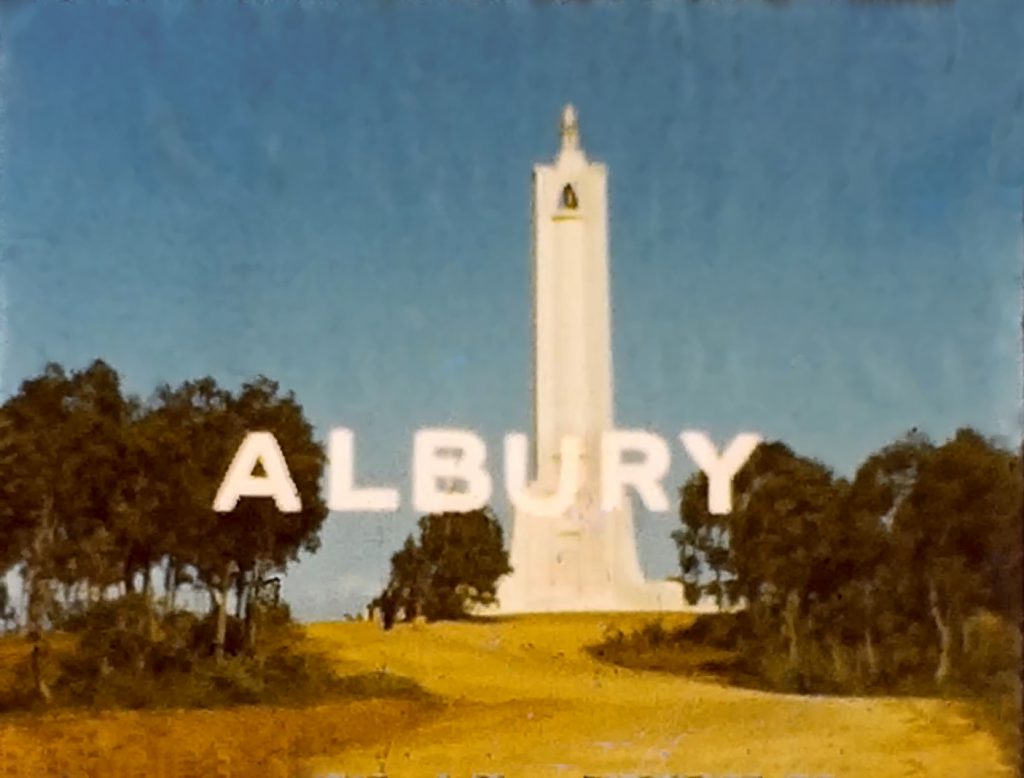 The first titles are a raised lettering set on black cloth. This approach appears a couple of times across the years, always overexposed so the black cloth is visible, it suggests that Doc Woods added titles at different times and also as a batch.
The Albury title  superimposition for the ‘Shots at Random’ is almost correctly (under)exposed, the black cloth wrinkles make the background image look like a still printed photo at first glance,  but it does have movement.

This metal title background frame was used for most of the titles in the Doc Woods movies. I’ve been unable to find this online as a commercial titling set. Given the standard (over) exposure I wonder if he added a lot of these later. The framing is different, the frame line moves so they could have been a second camera. 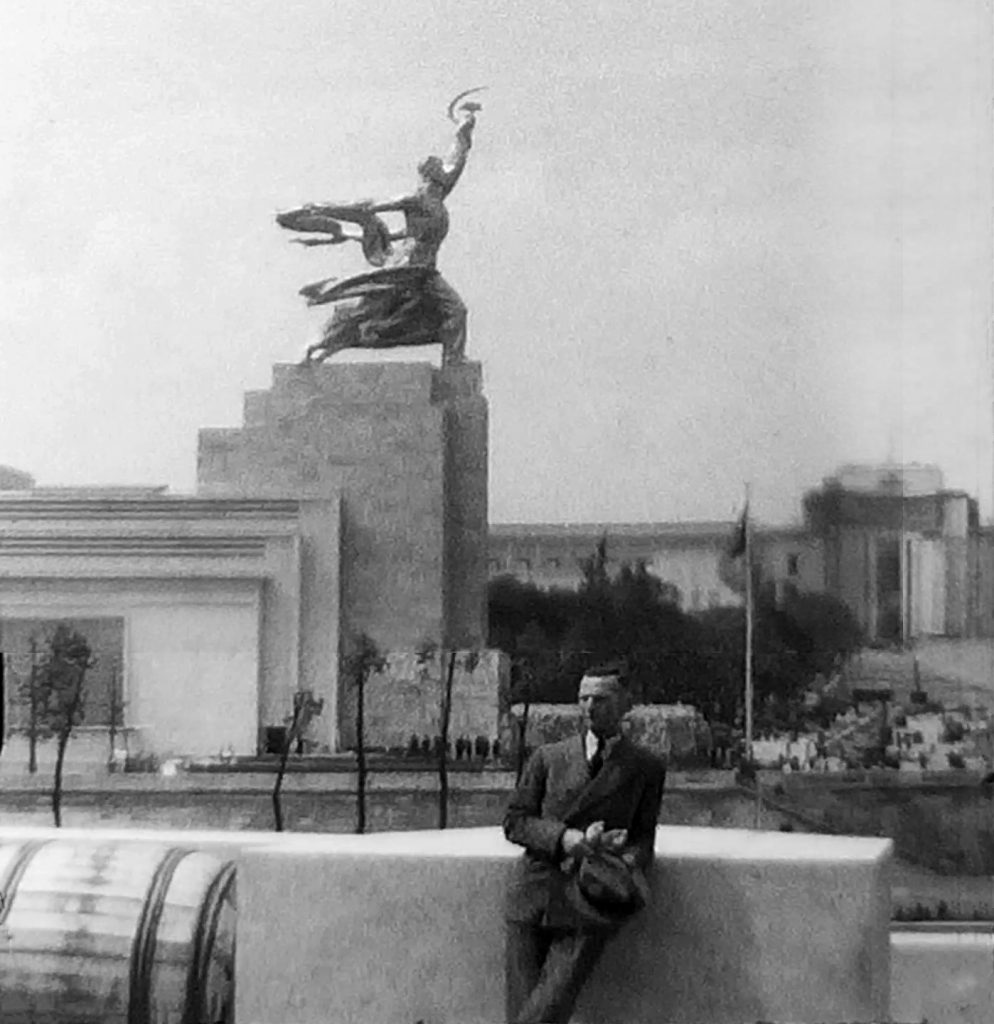 This is a composite frame I’ve made.  It’s modern, it’s Russian, it’s fashionable.

“After the feast moving pictures were shown by Dr. L. S. Woods. Much excitement was caused when the girls who took part in the Netherlands Day festivities saw themselves acting on the screen. Other films showed scenes of Albury and district, with an interesting commentary by Dr. Woods. The evening concluded with community singing and the serving of supper.”

In the box I was given there is no ‘Netherlands Day’ film so like some other sequences, I’m hoping it is still out there and will be added by a family contributor.

On the end of the Shots at Random Around Albury reel he has added some seemingly unrelated (thematically) short sequences from other reels we’ve seen. I’m glad he added this piece of a man walking to camera, a full frame light leak (all natural, no trendy VFX) where a horse and cart with a standing driver appears from the light flash and continues in the background as the suited subject (I’m guessing maybe one of the Rotarians we saw conference earlier). There was a time when men wore suits and hats. It’s a small ’30s dramatic movie. I’m glad he didn’t throw it away. There are light leaks/fogging on a few of the other ‘bits’ he attached on this reel.

Maybe it’s just that filmmakers don’t look at these as mistakes anymore but more as authenticating the film process. Now we have the cliche of digitally
added light leaks.

I’d like to think that some of the precision Doc Woods applied to these joins were those of a surgeon. There are few other hints to a ‘medical’ environment – a reel with a strip of adhesive tape used to add a name, and another strip to seal a spool box. 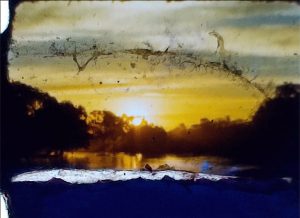 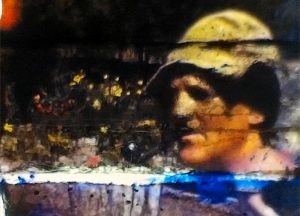 Sub Menu
Doctor Woods – Part 1.  Who are you L.S.Woods?
This is what I’ve found from archives and contributions, from the reports of general meetings of clubs and societies, obituaries, autopsies, published  fame and notoriety, and things he’d probably like to forget – like the Pyjama Girl Case.
Doctor Woods – Part 2. Albury
Looking at the town of Albury and linking its events to those that are in two films, Views around Albury and  Shots at Random  around Albury.
Doctor Woods – Part 3. Becoming a Filmmaker
His first cameras, learning the craft, titles (thank you) and then losing the rigour and becoming a home movie maker. Splices and dirty edges.
Doctor Woods – Part 4. A country doctor’s life
The family movies. The people he clearly loved, what interested him – (which at the end of his life was Merimbula with his fishing mates )