A Bungendore country camera
Low resolution and a high resolve

When I bought my first digital camera it was not a professional one but one I could afford, and one that was was highly reviewed on DPreview, (that’s an interesting document in digital camera history, my own review/alt.manual is here)). It was a Sony Mavica MVCD-1000. It recorded on mini-CD’s, at 2.1 megapixels  and it made collating the country life around me easier (than my Pentax Spotmatic 35mm-send-to-fast-photolab-pickup-after-work-scan-prints-for-website routine). Those screen images were going to be used small in deference to page load speed on slow modems, the backlit colours were bright, the blacks black. And I could control the output in Microsoft Image Composer (which came with Frontpage 98, I think).

It took me a year to realise that the 1600 x 1200 pixel images at screen resolution were a crappy way for a photographer to store his life, but it was the perfect note taking tool. Just one lens, a very long zoom, it could record stills with audio and even low resolution Mpeg movies when you needed it (although my parallel video recording of my life was moving higher and higher in camera quality). If there were moments of low-fi artistry captured, terrific! 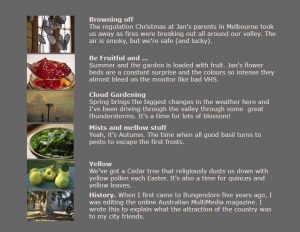 Before I started my website Another Country Diary I made a few pages to show to friends when they asked what my life was like in a country town, while I worked in Canberra and Sydney.

There’s a menu for those few pages here.
Some of the images show why I eventually moved to Photoshop (3!) when I tried to compress them too much in Image Composer, but they’re all stored away and annotated in Lightroom so I could replace them. But the need was for pure storytelling so it’s hard to bother just yet. They do look good on HD video so that’s an option I’m exploring. 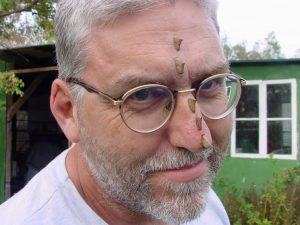 I liked this picture of me from one page (there are more images of me on this web archive than I knew I had, being that I’m behind the camera mostly. It’s not vanity, and it does accurately document the face of an ageing man).

I wrote this…”My daughter Aurore came up from Melbourne and she came with me to Sydney (for a Sitmar website meeting) and we spent some time at the movies (we both liked Princess Mononoke) and did some shopping for her clothes. Out in the garden I broke off a rose thorn and stuck it on my nose with spit. It was a country kid thing that she’d never seen or ever realised that the thorns came off. She suggested a dinosaur row of them and took my picture. We get close then she’s gone again.”

Aurore moved to Melbourne to live with her mum when she had to go to High School. It would have been a school bus into Queanbeyan or Canberra each day if she had stayed, and some of her primary school friends were going off, as country girls do, to boarding school.

The feature image is Lake George during the ten years of drought, looking back toward Bungendore from Collector. A place where sheep and cows could safely graze. It was taken with a later camera, probably one of my Canon’s that marched in increasing quality up to a 5D mark3.