This is Corryong
and this is my first documentary

The Snowy Mountains Scheme changed Corryong in the few years we lived there. My brother Phillip and I had taken the school bus everyday to the Corryong High School after sixth grade at the Jingellic Public School in NSW.  The Walwa Butter Factory where we lived and my father worked, was closing, and instead of taking the offer of a job at the Towong Butter factory, he decided to make a career change into radio and TV repair. I think we bought the old verandah fronted house with its back to the hill and pine plantation.

I had already started the school camera club, and we’d been allowed to use a storage area under the front steps of the new administration block (rebuilt after a fire). I don’t remember when making movies became a priority, but given the weekly movie theatre visits and my father being a projectionist it was probably a natural step.

I don’t have a lot of Corryong films from this time. I do have a lot of stills. One fictional attempt is the House with a Secret but it was never finished and is really just an incomplete reel of black and white and will have its own page. This was planned as document of the town, and the script was full of Fitzpatrick travelogue ‘and so we say farewell to the majestic Kosciusko mountains” which was really all I knew about travel films. We didn’t have TV until the first transmissions of Albury Channel ABN  came to us via a repeater. (Do you remember James Fitzpatrick? and the Peter Sellers parody written by Frank Muir and Denis Norden. 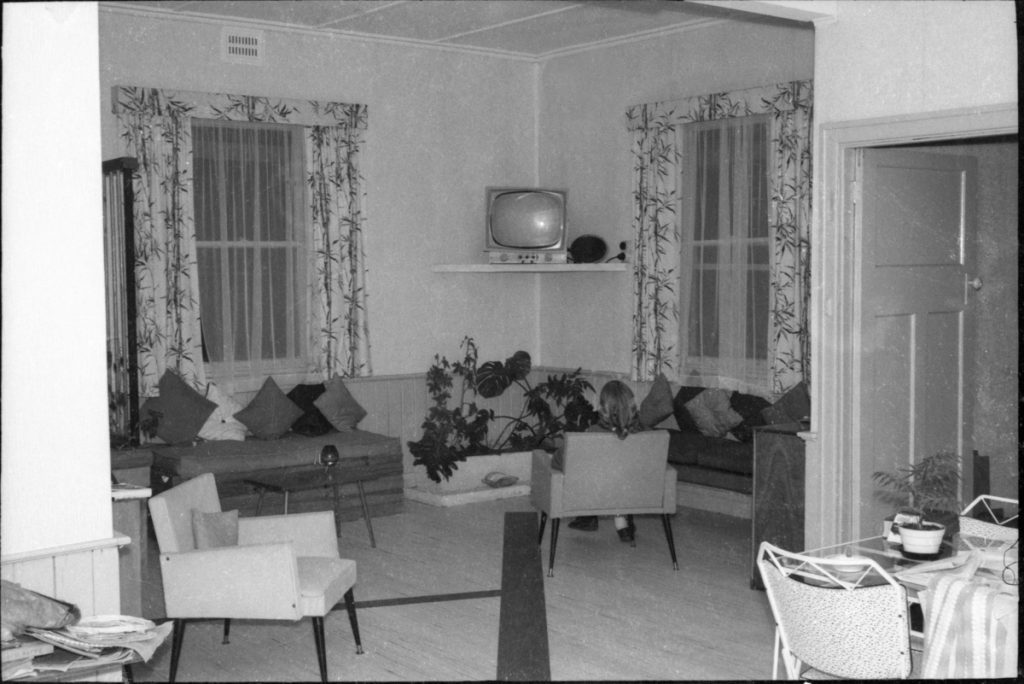 The corner TV was one my father repaired and brought home, with no cabinet.
He put in the corner shelf, and the TV sat with it’s valves exposed and a separate speaker until we left the house.